The fire ant first went to the US, then conquered the world 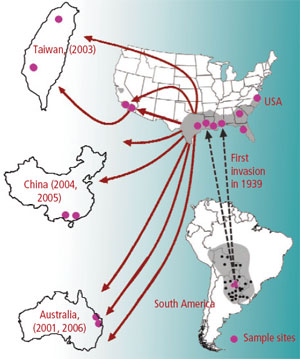 THEY entered the US from Argentina in the 1930s armed with lethal venom, gained a foothold in southern parts of the country and then marched to invade faraway countries across the world.

Such is the invasion strategy of Red Imported Fire Ant, or Solenopsis invicta, one of the world’s highly aggressive and venomous ant species, as per a research published in Science on February 25. The ant has spread to several countries, including China, Taiwan, Australia and New Zealand, in the past 20 years. They can cause a fatal allergic reaction, anaphylaxis, among people, kill livestock, ruin crops and even damage electrical equipment like air conditioners and traffic signal boxes.

To determine the ant’s origin, researchers led by DeWayne Shoemaker of the US Department of Agriculture collected ants from 2,144 colonies at 75 areas across the world and analysed their genome. The data suggested at least nine separate introductions of S invicta have occurred so far (see map). The southern US population is the origin of S invicta found across the world except the ones in Carribean countries. They might have spread as stowaways on cargo ships, the researchers said. So far the ant was thought to have spread from its native place in South America.

An understanding of their pattern of invasion and evolutionary shifts can help develop effective strategies against it, the researchers noted. At present insecticides and phorid fly, the ant’s natural enemy, are the only means to contain their spread.

Studies have shown the fire ant can survive in warm and humid climate, and soil temperature is the key factor regulating its growth and reproduction, said Marina Ascunce, co-author of the study. This means almost half of the globe, including India, is at risk of the ant’s infestation, she added.

Himender Bharti of the International Network for Study of Asian Ants agreed that Indian climate supports the species. The country already has a variety, S geminata, which is less aggressive. If S invicta reaches here it would not take long before it establishes its foothold in the country, he said.