An Israeli mathematician offers proof of how ants, without a bird's eye view of their terrain, are still able to follow a straight route to food 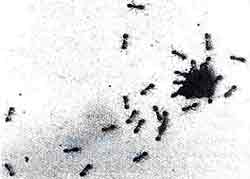 ANTS ARE known for their industriousness, but not many people know about their ability to figure out the shortest path between two points -- that is, along a straight line -- without having a bird's eye view of their surroundings. How ants follow a straight path to their food has confounded scientists for long, but now an Israeli mathematician seems to have found the answer.

Observations have shown that a "scout" ant searching for food leaves a faint trail of chemical signposts called pheromones. Physicist Richard Feynman had surmised that randomly moving ants superimpose their pheromones and the peak concentration is along the straight-line path. Computer simulations seem to bear out Feynman.

But Alfred Bruckstein of Technion University in Haifa, Israel, has come up with the first mathematical proof of how ants come to follow a straight line path. In Bruckstein's model, one scout ant sets off and lays a trail. A second ant, moving at the same speed, starts some distance behind, but always in pursuit of the scout. A third ant pursues the second in similar fashion, and so on. Bruckstein found the angle through which the scout ant had turned at a given point was reduced by subsequent ants till the path became straight.

The model, however, is not an exact description of reality. Real ants wander at varying speeds along a pheromone-splashed landscape, rather than playing follow-the-leader at uniform speeds. Nevertheless, Bruckstein's method provides an elegant example of how each individual in a system following purely local rules can give rise to a collective behaviour, such as the flocking of birds and the movements of shoals of fish.