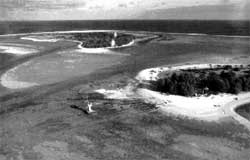 the Pacific atolls of Mururoa and Fantagaufa will once again become beehives of activity. This time, however, instead of the booming nuclear explosions, there will be scientific work carried out to study the radiological effects of the nuclear tests.

International scientists will be collecting all types of terrestrial and marine samples including soil, coconuts, vegetation, plankton, seawater, coral, fish and lagoon sediments for their study. The report is expected to be complete by early 1998. The radiological study is being conducted at the behest of the International Atomic Energy Agency based in Austria. An international advisory committee of distinguished scientists from 10 countries, headed by E Gail de Planque of us, members of the un scientific committee on the effects of atomic radiation, World Health Organization and the European Commission, will make up the research team.