Any takers for hydroponics? 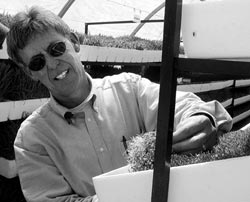 a method that uses roughly only one-hundredth the fresh water customarily needed to grow forage for livestock may leave much more water available for human consumption and industrial use.

The method is being tested by 42 wireless sensors being installed in a forage-growing greenhouse built barely a stone's throw from the Mexico border under the supervision of the us National Nuclear Security Administration's Sandia National Laboratories. "Sandia is interested because disputes over water are possible, if not likely, causes for war in the 21st century," says lab researcher Ron Pate.

The new method, called hydroponics, basically involves growing plants in a greenhouse. The difference between traditional agriculture and hydroponics is that the greenhouse plants do not draw nourishment from the Earth. They rely on nutrition present in seed that is germinated, precisely watered and harvested after about 10 days of growth. Thus, more seed is required for the production of forage as per hydroponics (compared to traditional cultivation methods) but with far less water use.

Preliminary indications are that hydroponic greenhouses in New Mexico, for example, could reduce the current 800,000 acre-feet of water requirement to 11,000 acre-feet, and still produce an equivalent amount (dry weight) of forage. Moreover, they are able to do so on less than 404 hecatres of land instead of 10,521 hectares -- the amount used for New Mexico production of alfalfa. Eighty per cent of New Mexico's water use is agricultural; over half goes toward growing forage.