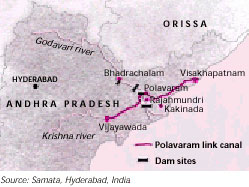 the Andhra Pradesh (ap) government's recent initiative to start the Indira Sagar Dam Project on river Godavari at Polavaram in West Godavari district has evoked serious protests from tribals of West Godavari, Khammam and East Godavari districts. Complains the Adivasi Girijana Samakhya , an organisation of tribals: "The...project will affect both tribals and non-tribals in three districts...It is an attempt to hoodwink the people in these areas to benefit people in some other area. Nearly 246 villages...will be affected...Nearly 500,000 tribals will be displaced and there is no plan for their rehabilitation." T he project would be funded by the state government, in collaboration with the Austrian government.

"We are taking into consideration various aspects, including the issue of tribals, and have sent the project proposal to the Central Water Committee (cwc) for approval," says Thirumala Rao, deputy engineer of the project. cwc chief engineer R C Jha clarifies: "We rejected the Polavaram project in 1987 due to technical and environmental issues. This time, we have asked for the revised Detailed Project Report." Ravi Pragada, an environmentalist who runs a Hyderabad-based non-government organisation, Samata, points out that the project couldn't garner funds from the World Bank and the Asian Development Bank because it does not compensate people sufficiently. This project also needs to be approved by Orissa and Chattisgarh, as it will submerge some areas in these states -- a potential cause of water disputes.

The state government says it will pay a compensation of nearly Rs 2,051 crore. Each village will get around Rs 74,311,594 (nearly Rs 732,500 per family). But tribals want to be compensated as per the market price and get land as compensation in their area of resettlement. Also, nearly 100,000 people belonging to scheduled castes, who have stayed in the area for years, would be displaced but they won't get any compensation because they are considered encroachers. The people of Telengana are also opposed to the project, as river Godavari's water will be transferred to the Krishna delta. Chairperson of the Telegana Rashtriya Committee, a key ally of the state government as well as the Centre, says:"We will pressure the government to leave this project...and, if needed, we would raise the issue in the co-ordination committee meeting of the United Progressive Alliance."