Apex court gets tough on entry of trucks 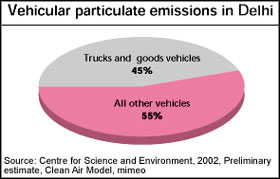 The Supreme Court (sc) has issued show-cause notices to the Delhi government and the Delhi police commissioner for non-implementation of its order banning the entry of trucks which do not comply to Bharat Stage-II (equivalent to Euro-II) norms in the capital. On December 6, 2001, the sc had banned the entry of trucks not adhering to Bharat Stage-II norms in the capital. The order was to come into effect from January 15, 2002. The court also reiterated that there would be no corridor joining different national highways, which will allow trucks to pass through Delhi.

If implemented, the order will bar nearly 65,000 trucks from entering Delhi. Barring the entry of polluting goods vehicles will reduce particulate matter emissions from trucks by at least 55 per cent, according to preliminary estimates of the vehicular emissions model of New Delhi-based non-governmental organisation Centre for Science and Environment. Trucks are the biggest emitters of particulate matter, contributing as much as 45 per cent of the total particulate emissions from vehicles (see graph). The Union government was also rapped for not submitting a feasibility report for introducing liquefied petroleum gas and compressed natural gas for two and three-wheelers in other polluted cities of India.