A cow succumbs to the drought in Portugal 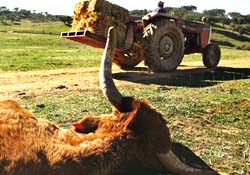 The past year's droughts in Africa, central America, Asia and Europe are part of an emerging, global warming-induced pattern that will become more pronounced if climate change is not curbed. In 2005, one in six countries will face food shortages, un scientists warned on June 29, 2005.

The admonition was part of a message given by Wulf Killman, chairperson of the un Food and Agriculture Organisation's (fao's ) climate change group, to the leaders of rich nations prior to their g8 meeting at Gleneagles in Scotland. Africa is our greatest worry...Many countries are already in difficulties...and we see a pattern emerging. Southern Africa is definitely becoming drier and everyone agrees that the climate there is changing." In 2005, many countries have had their worst harvest of a decade; they have already faced three-four severe droughts in just a few years. Ethiopia, Zimbabwe, Malawi, Eritrea and Zambia, where at least 15 million hungry people won't even get aid, would be the worst-hit, Killman points out, adding that Niger, Djibouti and Sudan would also fair badly.

Harsh droughts have also been reported in other countries, in other continents: Cuba, Cambodia, Australia, Afghanistan, Vietnam, Guatemala, Honduras and Nicaragua. The un's famine early warning system says current crops in 16 nations, including Peru, Ecuador and Lesotho, face "unfavourable prospects". In Europe, Spain and Portugal have been hit by one of the worst droughts in their history. Farming activities in Morocco has been destroyed due to the same regional drought to such an extent that the government now fears mass migration of people to cities. Scientists believe the Mediterranean region, as a whole, is drying up. "The 20-year average clearly shows a dramatic increase of desertification and drought," says Giovanni Quaranta, an eminent agricultural economist who teaches at the University of Basilicata, Italy.

Killman points out that since the world's food production didn't increase in the past four-five years, food stocks were raided to meet the rising demands. The situation may lead to a major crisis if global warming increases. Currently, 34 countries are already facing droughts and food shortages; others might joing them soon. Rich industrialised nations are majorly held responsible for causing global warming through their greenhouse gas emissions. But some of them like the us, the world's biggest polluter, haven't ratified the Kyoto Protocol, a global treaty to fight climate change. British prime minister Tony Blair, who heads the g8, has claimed he would make the us change tack at Gleneagles.