Appearances can be deceptive 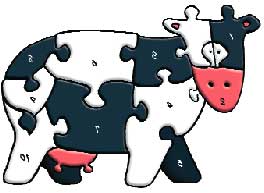 Study the cow to understand the human system better, 80 per cent of their genes are similar

so far all the talk was about how closely humans resemble chimpanzees. Since humans are descendants of the apes, the large amount of research that went into establishing the fact followed quite naturally. As a result, other probable kins had to remain in the shadows. Not anymore though. A six-year-long study involving 300 scientists from around the world, saw 22,000 genes of the cow sequenced under an ongoing bovine genome project. The animal, whose milk is a vital source of calcium, vitamins and minerals for the world is not very different from humans--they share 80 per cent of their genes with the cow.

The researchers analyzed the genome of L1 Dominette, a female cow of the Hereford breed, commonly used in beef production. They found cow-specific genes for milk production and immune response.Due to genetic similarities, this sequencing, besides being economically important for the livestock industry, will play a role in targetting human diseases, said the team.

Within the same breed, one cow might be better at producing milk than another even though both might be bred only for milk. Such differences in individuals are based on differences at the level of nucleotides which are the four building units of dna. Each unit on a strand of dna has a corresponding unit on the other strand. Sometimes one nucleotide replaces another and this change is termed single nucleotide polymorphism (snp). "Mapping these snps will allow us to see how domestication impacted cattle," said Harris Lewin, one of the authors from the University of Illinois, usa, on the Science podcast.

The researchers sequenced the dna of seven cattle breeds including the Hereford. One breed was from South Asia and six from Europe. The breeds' snps were mapped to unravel their genetic history. The results indicated that South Asian breeds have greater genetic diveristy than the European ones. Artificial breeding has led to the loss of many genetic traits. Nevertheless cattle, in general, have maintained a fairly high diversity of genes.

The added advantage of mapping the snps is that it will save the livestock industry money. "If the snps of a cow tell us that it is a better milch cow, we can breed it with another such cow. Breeding can now be done on a genetic basis and not just physical characteristics. It will be far more specific and focused," said V S Raina who heads the cattle breeding division of India's National Dairy Research Institute, Karnal, Haryana. The beef industry will have similar advantages.

The analysts also observed that important genes like the ones involved in milk production are found at points where the chromosomes break during cell division and so, are prone to mutation. This could be used for breed improvement. These findings were reported in the April 24 issue of Science.


Only in 20 per cent of the cow's genes lies the traits that makes a cow so very different from a human.

Of the 22,000 genes sequenced, 14,000 are shared by all mammalian species. The team found 313 genes in cows similar--though not identical--to human genes. For example, the human immunity gene differs from that of a cow but both do the same thing. Such genes are called orthologs. Cows and humans have twice as many orthologs than cows and rodents, even though cows separated from rodents much later during evolution. Cows are strong at fighting infections, so they would make good lab animals, added the researchers.

The analysts also saw some rare changes had occurred in the cow genome. One metabolism gene has changed and now codes for a protein, histatharin, that gives the cow's milk antimicrobial properties. Changes in such fundamental genes are rare. "The new genes could have evolved in response to farming conditions," explained David Caramelli from the department of evolutionary biology at the University of Florence, Italy.

"The genome map is the window to understanding how the cow ended up with a four-chambered stomach, how its immune system operates and how it is able to secrete large amounts of protein in its milk," said Lewin.

Other genome mapping projects are examining dogs, mice and possums.