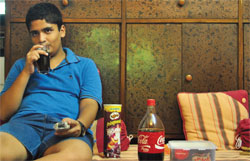 Television ads for junk food tend to make children crave for those treats, especially if they watch a lot of television, according to a study.

In tests with six to 13-year-olds, researchers led by Emma Boyland from the University of Liverpool in the UK found that a DVD featuring ads for junk food seemed to whet children’s appetites for sweet and high-fat products. “Exposure to television food ads enhanced high television viewers’ preferences for branded foods and increased reported preferences for all food items relative to the low television viewers,” Boyland says.

The children reported a greater desire for sweet and fatty foods after viewing the junk-food ads compared to days when they watched commercials for toys. This was especially true for children who usually watched a lot of television in their everyday lives, with “a lot” defined as over 21 hours a week.