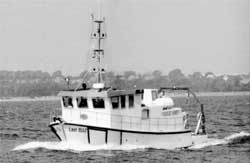 torbang vang, a Danish marine geologist, is understandably proud of his country's expertise in developing advanced marine monitoring systems. 'Scanfish', developed by a small enterprise in the Danish town of Snekkersten, is a unique device designed to monitor seawater salinity, oxygen concentration, algal content as well as check the dumping of sediments and the condition of seabed vegetation (Danish Environment, No 6).

Scanfish resembles an aerodynamic suitcase with black fins on its sides and measurement instruments placed forward on each side in the manner of a hammerhead shark. This curious apparatus is lowered into the waters using a steel wire which is attached to the environmental monitoring vessel Tyra and connected to its computers. The Tyra's low deck serves as a perfect working platform.

The ship carries a probe as well, beside the scanfish. This probe contains 12 measurement instruments and containers for water samples. In a computer controlled descent, it is gradually sunk 20 m down into the seabed. Every 20 cm during the descent it pauses to make measurements, which are then transmitted to the Tyra's comput ers via a cable.

The probe's measurements clearly show the transitional phases in the water that form the boundary between the cold, saline and relatively oxygen-poor water at the bottom, and the warmer oxygen-rich water on the surface. In rough seas, the equipment compensates for the rise and fall of the vessel so as to guarantee that the measurements are made at intervals of exactly 20 cm. The probe measures the temperature, oxygen content, salinity, ph value, specific gravity, turbidity, algal content of the water as well as the amount of light, speed and direction of the water current. While the probe takes measurements vertically, scanfish can measure horizontally. Thus a three dimensional measurement is obtained.

When the Tyra is not monitoring oxygen conditions, it sails out to assess the dumping of sediments dredged from harbours and shipping canals. Other tasks include monitoring the condition of seabed vegetation and analysing samples of bottom-dwelling invertebrates.