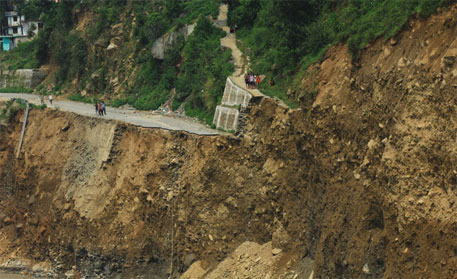 In the last couple of years, floods in Uttarakhand and Srinagar have wreaked havoc on lives and livelihoods. In 2014, north India faced tremendous hardship as it bore the brunt of the longest heat wave on record. More recently, unseasonal rainfall caused widespread damage to the kharif crop. These events make us dig deeper into the science of climate change and determine whether extreme events occurring world over are part of “nature’s fury” or they can be specifically linked to global warming and, consequently, human activities. Although no weather extreme can be solely attributed to humans, a growing body of research shows that extreme weather events like floods, droughts and heat waves have increased in frequency.

A recent study, by E M Fischer and R Knutti of the Institute for Atmospheric and Climate Science, Switzerland, tries to estimate the contribution of global warming in the occurrence of extremes of temperature and precipitation and find a significant correlation at a global scale. The paper also warns us that with increments in warming, the frequency as well as intensity of heat and heavy precipitation events will rise further. The study was published in the scientific journal Nature Climate Change on April 27, 2015.

The paper estimates the fraction of “moderate extremes” that can be attributed to global warming. Fischer explains via e-mail that the somewhat paradoxical term “moderate extreme” is defined as a weather event that occurs once in 1,000 days (or once in three years). The study finds that 75 per cent of hot days occurring globally and 18 per cent of heavy rainfall days are attributable to global warming.

The paper forecasts that if we reach a situation where there is an increase in the global average temperature to 2°C over pre-industrial levels, then around 40 per cent of heavy rainfall days and 95 per cent of hot days will be due to human influence.

It is very interesting to note how they arrived at these numbers. They plotted on graphs the frequency of extreme weather events in pre-industrial temperature conditions, present day warming and higher levels of warming using simulated data from several climate models. They found that the likelihood of extreme events has increased with warming. This increased probability can be attributed to global warming and, thus, largely human activities. They also forecast a further increase in extreme events as warming increases.
J Srinivasan, chairperson of the Divecha Centre for Climate Change at the Indian Institute of Science, Bengaluru, finds the methodology of the study quite robust. He explains that climate change models are quite accurate when it comes to larger regions and understanding global trends.

Fischer tells us that the models show an increase in heavy rainfall extremes in India over the long run. This is consistent with findings of the Intergovernmental Panel on Climate Change (IPCC) and studies conducted in India. A widely cited paper published in the journal Science in 2006, with B N Goswami (former director of the Indian Institute of Tropical Meteorology, Pune) as the lead author, showed that the frequency of occurrence as well as the intensity of rainfall and heavy rainfall events have shown a significantly increasing trend over central India.

Another paper titled “Impact of climate change and extreme rainfall events and flood risk in India” led by P Guhathakurta of the India Meteorological Department (IMD), Pune, extended the scope of the study to the rest of India and found a similar increase in heavy rainfall events for most parts of India. But Chhattisgarh, Jharkhand and some parts of northern India showed a decrease in intensity as well as frequency of extreme rainfall events. The paper also shows that there has been an increase in the flood risk over the decades.

J Srinivasan tells us that there has been a 50 per cent increase in extreme rainfall events over the Indian subcontinent. However, he warns us against making simplistic assumptions about attributing localised extreme events solely to global warming. He says many other factors like aerosol content in the atmosphere and land use patterns also contribute to extreme events at a local level. A study led by C M Kishtawal, published in the International Journal of Climatology in 2009, studied the relation between urbanisation and occurrences of extreme rainfall and found that urban areas tend to have significantly higher occurrences of intense precipitation as compared to non-urban areas. The El Nino Southern Oscillation (ENSO) is also a factor which has an impact on extreme weather events in the subcontinent. However, the correlation between global warming and ENSO is still uncertain.

Thus, the long-term trends on a global scale as well as in the Indian subcontinent indicate the unequivocal influence of global warming in temperature and rainfall extremes.