Will the world's only digital arsenic tester prove handy in India? 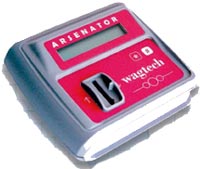 wagtech, a uk-based company, has recently introduced the world's first portable arsenic testing device in India. Arsenator is a digital photometer, which gives readings of arsenic levels within the range of two to 100 microgrammes per litre (g/litre) of water.

Its methodology is simple. Reagents reduce inorganic arsenic in water to arsine gas, which reacts with mercuric bromide on a filter strip and turns it from white to different hues of yellow or brown, depending on the arsenic concentration. The strip is then inserted in the Arsenator, which calculates the precise levels of the contaminant. It takes about 20 minutes to conduct the test.

According to Neil Durham, managing director of Wagtech, the device has several advantages, such as giving immediate results. "It will help save millions of lives," he claims. The company plans to market the product in collaboration with the private sector. The price of the entire Arsenator kit is us $1,837.

Considering the cost, Indian experts are doubtful that the product would prove to be as promising as the company claims. "Both in Bangladesh and West Bengal -- the arsenic hotspots -- people are poor. Even non-governmental organisations working in the region cannot afford the Arsenator," asserts J N Ray, International Development Enterprises, New Delhi. According to him, the Merck kit is a more feasible option, as its cost is much less.

Germany-based Merck is marketing the kit, which to date has been used to test around one million wells in Bangladesh. Like the Arsenator, it is also based on the mercuric bromide stain principle. But the arsenic levels are gauged manually -- by comparing the colour on the filter strip with a colour-scale chart provided along with the kit. The first-generation Merck kit had a minimum detection limit of 100 g/l. In 2000, an improved version with a minimum detection limit of 10 g/l was launched. But despite this improvement, many experts are sceptical about the kit's wide-scale use. "The colour on the strip and the chart can be interpreted differently by users, especially if they are inexperienced. Therefore, its error rate is quite high," they assert.

Even the Arsenator has an error rate of 5-10 per cent. "Imprudent use of such kits could exacerbate the arsenic crisis," asserts A K Agrawal, head of the Indian reference materials section, National Physical Laboratory, New Delhi. As per Bhuvanesh Gupta, associate professor at the Indian Institute of Technology, Delhi, use of the kits can be replaced with a national system of collecting water for laboratory analysis. It will prove to be cheaper and more accurate.