Knocking off the plant gene could check arsenic poisoning 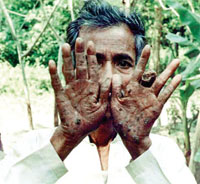 BIOLOGISTS have identified genes in plants that control arsenic accumulation. The discovery promises to prevent the heavy metal from entering the food web and also clean contaminated sites through bioengineered plants.

Scientists had been looking for the genes for 25 years. “Identifying them is a crucial step in keeping arsenic from accumulating in the edible parts of plants, like rice grains and fruits,” said Julian Shroeder, biologist at Columbia University in USA.

The heavy metal damages the intestine, kidneys, liver and lungs and increases risk of cancer. As the plant absorbs water, arsenic binds with a plant molecule, phytochelatin, which transports it to vacuoles, a storage structure in plant cells. Eating plant parts that contain arsenic-filled vacuoles is harmful.

Shroeder’s team analysed the genetic material of a yeast, Schizosaccharomyces pombe, and found its ABC2 gene controls the activity of phytochelatin and plays a role in arsenic accumulation in the yeast, the team noted in the November issue of Journal of Biological Chemistry.

Shroeder later teamed up with scientists of University of Zurich in Switzerland and found two genes in Arabidopsis plant that control transport and storage of arsenic. Knocking them off will prevent the uptake and accumulation of arsenic in plants, the scientists noted in the November issue of PNAS.

Andrea Foster, scientist at the US Geological Survey, said the findings suggest non-food plants can be bioengineered to absorb arsenic from contaminated sites. They can be later burnt to eliminate the heavy metal, she added.