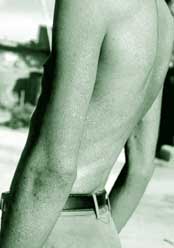 a us study shows an individual's genetic make-up is important for how the person reacts to arsenic -- be it in contaminated water or in the form of medicine. It found children with a particular variation in a gene called the cyt 19 metabolise arsenic differently than adults with the same genetic variant (Environmental Health Perspectives, June, Vol 113, No 6).

The research raises the possibility that the risk of developing arsenic-related disease is not the same for everybody. "Finding genetic determinants of arsenic metabolism may one day enable us to identify a super-susceptible group of people," says Walter T Klimecki of the University of Arizona, who led the research team.

Arsenic, a heavy metal, causes diseases such as circulatory and neurological disorders and cancer, mainly of the skin, lung and bladder. In the body, arsenic is converted into different compounds, some highly toxic, through a series of biochemical reactions. It finally leaves the body through urine.

Studying the distribution of arsenic metabolites in the body is important because they have different toxic potencies, adds Klimecki. One question has always plagued researchers -- since people carry different versions of dna sequence for any given gene, do they also metabolise arsenic differently? Klimecki and his co-workers found the answer is yes.

The team analysed arsenic levels in urine samples from 135 individuals aged 7 to 79 years from the Yaqui Valley in Sonora, Mexico, who were exposed to drinking water containing arsenic. The researchers then analysed dna samples from the same individuals for variations in three genes involved in arsenic metabolism. They found the distribution of arsenic metabolites was different in urine samples from people with a certain variation of the cyt 19 gene. Klimecki's team made another unexpected discovery. When the team split up the data into different age groups, it turned out that the association between the particular form of cyt 19 and altered urinary arsenic metabolites could only be found in children. Adults carrying the same variant of cyt 19 do not metabolise arsenic differently. "Apparently the genetic variation affects arsenic metabolism only during childhood," said Klimecki. This result could be important for cancer treatment, as arsenic is used as a drug in leukaemia therapy. Individual differences in the way arsenic is metabolised could influence the drug's efficacy.