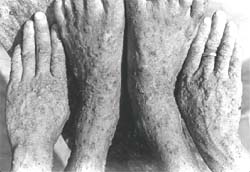 " everyone in the house used to drink water from the tubewell, though we knew it had a very high iron content. Sometime ago, I got the tubewell water tested and found that it was arsenic positive," says Abdur Razzak Mollah, a resident of village Dhuldi Rajapur in Faridpur district, Bangladesh.

His woes don't end here. His parents are suffering from hyperkeratosis in the feet and keratosis in the palms. "This is not an isolated case," says Prosun Bhattacharya, research coordinator, Groundwater Arsenic Research Group at the Royal Institute of Technology, Stockholm. He adds, "My study shows that nearly all the water samples taken from wells in Bangladesh have arsenic." To redress the situation and free the water from arsenic, Bhattacharya and his team is propagating laterite treatment for the removal of arsenic from groundwater.

The experiments done by Bhattacharya show that laterite is an effective filter medium for the arsenic contaminated groundwater. "Experiments carried out on raw water with arsenic concentration from 0.3-0.4 milligramme per litre (mg/l) with varied quantities of added laterite revealed 70-80 per cent removal of arsenic," says Bhattacharya . The effect of varying time indicates no significant difference between 5-10 minutes up to several hours. It was observed that the maximum effective absorption was achieved during the first 10 minutes and remained more or less constant with time. "The experiments also indicated highest absorption for the fine grained laterites due to the availability of increased reactive surface area," he adds.

"Two batch tests performed in the field by adding 100 gramme (g) and 50 g untreated laterite to 2 litre groundwater sample indicated removal of 50 per cent to 65 per cent arsenic. These preliminary field results indicate that the absorption in largerscale tests follows the similar pattern as observed in the laboratory experiments and therefore it is important for the practical implementation in the field," he says.

Removing arsenic from groundwater is done through a simple process. Groundwater is collected from the wells and is let to stand for a specific period of time in contact with air. Since most groundwater from the Holocene alluvial aquifers in the Bengal Delta Plain have concentration of dissolved iron, they are readily oxidised and form ferric precipitates in the containers. Some of the recent observations on the filtered and acidified groundwater samples collected from two adjacent wells from Harian village in Rajshahi District have indicated different iron and arsenic concentrations. A similar set of water samples from different depths at Ujalpur in Meherpur district, however, revealed contrasting results due to the redox condition of the groundwater. Redox is a reversible reaction in which one species is oxidised and another reduced.

Arsenic is mainly transported in the environment by water and effects of arsenic have been seen in large number of organs in both animals and humans. The incidence of high arsenic in groundwater from the Holocene alluvial aquifers in the Bengal Delta Plains in West Bengal and Bangladesh has emerged as the greatest calamity of the present century. Nearly 30 million people in West Bengal and another 40-50 million in Bangladesh are directly affected due to continuous ingestion of arsenic rich groundwater. Symptoms of arsenicosis are primarily manifested in the different types of skin disorders such as skin lesions, hyperkeratosis and melanosis.