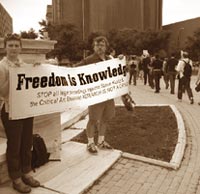 What would government officials make of bacteria-filled petri dishes and dna-extraction equipment at a professor's home? Art? Science? No, in the us these things could only mean a 'terrorist' conspiracy to build a biological weapon.

That's what Steve Kurtz, who teaches art in the University at Buffalo, usa, found on May 11, 2004 when he called 911 after finding his wife unconscious. A paramedic saw laboratory equipment in the house, and within hours government security agents had seized Kurtz's books, papers, computer and artwork. Kurtz's wife had died of a heart failure, but as her body lay unattended he was questioned for two days. Crews in protective suits tested his home for ricin, anthrax and plague. Of course, they found nothing.

For Kurtz isn't a bio-terrorist, but an unconventional artist who blends biology with agricultural and ecological issues.

Kurtz's attorney alleges his client was being harassed because of his views and his being a member of the Critical Art Ensemble, an art group critical of capitalism and which questions the fast growth of science and technology.

Kurtz told officials that the bacteria, which were harmless, and the equipment found in his house were for art. But the government is pressing on with its bizarre investigation. Six of Kurtz's friends appeared before a jury on June 15, which will decide whether he can be tried for bio-terrorism. To Kurtz's supporters it seems his art is already on trial.