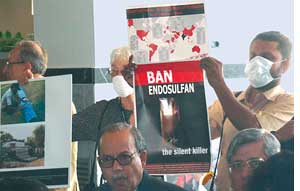 India blocked export restrictions on them at Rotterdam Convention

india yet again played spoilsport by preventing chrysotile asbestos and endosulfan from being included in Annex III of un's Rotterdam Convention that brands them hazardous. Had the two been included in Annex III, it would have made mandatory for countries to take a Prior Informed Consent, or pic, before exporting them to other countries.

Of the three substances listed for pic at the fourth meeting of the Conference of Parties (cop-4) to the Rotterdam Convention, only tributyltin was listed at the meeting held from October 27 to 31 in Rome. While seven countries opposed asbestos from being blacklisted, in case of endosulfan only India was responsible for its exclusion. "India was put in a spot when country after country joined in accusing it for its entrenched position of not allowing the listing of endosulfan, a highly toxic pesticide," said Madhumita Dutta of Chennai-based advocacy group The Other Media.

Kerala, where endosulfan killed hundreds of people before being banned in 2002, passed a resolution on Nove- mber 5 demanding that India retract its statement at Rotterdam Convention. Chief Minister V S Achuthanandan said India should ban the use of the pesticide. State agriculture minister Mullakkara Ratnakaran said he was surprised the Centre did not find evidence to ban it. "We have given them enough social and statistical evidence and data provided by the Kerala Agricultural Univerisity," Ratnakaran said.

Sruthi, a young girl of Padre village in Kerala's Kasargod district, was born with stag-horn limbs, an ugly result of 25 years of spraying endosulfan on cashew plantations. Sixty-something Mangabhai Patel was exposed to asbestos for over 25 years at the Ahmedabad Electricity Authority in Gandhinagar before being diagnosed with asbestosis, a chronic respiratory disease. Both are unaware of the meeting that took place miles away to discuss the hazardous substances they and thousands like them are victims of.

"In case of chrysotile asbestos, not a single country which opposed the inclusion has any objection to the scientific process or document. They all opposed it politically," said Datta. The countries that opposed the inclusion of asbestos were India, Pakistan, Kyrgyzstan Republic, Kazakhstan, Vietnam, Ukraine and the Philippines.

The Indian delegation, led by environment and forests ministry officials, said it was tough to decide on asbestos because the study on it by the National Institute of Occupational Health was still under way. "The Indian delegation acted under pressure from representatives of the chrysotile asbestos and the chemical industry," said Gopal Krishna of Ban As- bestos Network of India, a group of heal- th, environment and labour activists.