Police use batons, tear gas on protesters of plant in Muzaffarpur 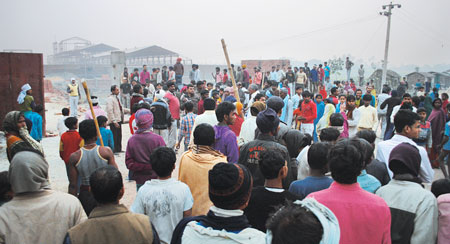 MORE than 5,000 people were lathicharged while protesting the construction of an asbestos plant in a village in Muzaffarpur district of Bihar. On January 22, residents of Chainpur were staging a sitin outside the site to protest cancercausing asbestos when police tried to disperse them. When the protestors turned violent, the police resorted to lathicharge and burst tear gas shells.

“We were on a dharna. After a while police officials came from inside the plant and asked us to leave. When we refused, they started beating us,” recalled Ashutosh. “When the officials did not stop, a passerby went to nearby villagers for help. Within minutes about 5,000 people rushed to protect us,” said Panwa Devi. “More cops were called and instructed to use batons.” Police did not even spare women and children.

“One policeman hit me with the butt of his gun near the left side of my chest. I was holding my daughter on my right,” said Kalash Devi. “When the police failed to disperse us, they used aansu gas (tear gas),” added Krishna Kumar.

By the time a senior officer arrived, more than a dozen people were critically injured, including six women, he added. Shashikant Singh, sub-inspector of Karja police station that has jurisdiction over Chainpur, said: “We cannot allow anyone to take law in their hands.”

When asked why women and children were beaten, he said: “We didn’t hit them. They must have got hurt in the furore.”

Duped in name of development

In January 2010, private company Balmukund Cement and Roofing Limited bought some portions of agricultural land from a few residents of Chainpur, saying it will build an iron rod factory or a farmhouse. Instead, it started building an asbestos fibre and cement roofing plant on the 18-hectare (ha) plot (see ‘Asbestos unit disturbs Chainpur’s peace’, Down To Earth, June 30, 2010). The construction began before the project received clearance from the Union Ministry of Environment and Forests. It got the green signal in October 2010.

“It has been more than a year since we started protesting,” said septuagenarian Madnesh of Chainpur. Jugal Kishore, like the rest of the villagers, sold his land thinking an iron rod factory will lead to the development of Chainpur. He along with rest of the villagers has proposed the company set up any other factory that has no health hazards. “We know the ill-effects of asbestos.

Three men from our village who worked for years in asbestos factories in other states died of cancer,” Kishore said. Madnesh claimed the company not only acquired properties illegally but also cheated the government by giving wrong information about the land. The company has shown that the 18-ha plot is barren and has Patahi village in its east, Jaitpur in the west, Bahilwara and Kanti in the south and north respectively. “The facts are just the opposite.

Chainpur is just a stone’s throw from the factory; Parari and Jian are within a 50 metre radius. And most importantly, the land is fertile,” said Madnesh.

Residents allege that besides lathicharging and throwing protestors behind bars, the police and the company officials have resorted to another tactic to silence them: denying medical help.

Some private medical practitioners are receiving threats not to attend any villager who is against the asbestos plant. Kaushal Kishore Singh of Chainpur is one of them. “They are asking me not to treat them. How can I ignore sick people?” he asked.