AN 18 hectare plot straddling lychees orchards and farms in Chainpur village of Muzaffarpur district is in the midst of a dispute.

A company, Balmukund Cement and Roofing Ltd, is constructing an asbestos fibre and cement roofing plant on the land. Villagers nearby are opposing it saying the company bought land from them on the pretext of building a farmhouse but started constructing the factory. They termed the construction illegal as the Union Ministry of Environment and Forests (MoEF) has not given environmental clearance to the project and the mandatory public hearing is yet to be held.

The start of work is a violation of the Environmental Impact Assessment (EIA) notification of 2006, said Umesh Prasad Singh, a lawyer in Muzaffarpur. The notification says a project proponent cannot start construction or development without environmental clearance.

Work started at the site in January whereas the MoEF has issued only the terms of reference (ToR) for the project’s EIA, in February 2010. Nonetheless, the Bihar state pollution control board (BSPCB) gave its nod to the project through a consent to establish. Manoj Kumar Singh, member secretary of BSPCB, said it is the ministry that has to take a stand on the illegal construction. The villagers’ anger was aggravated when they saw a newspaper notice issued by BSPCB. It said the public hearing for the project would be held on May 29 at a temple 27 km from the site.

“The EIA notification says the public hearing shall be at the project site or in close proximity,” said Arvind Kumar Singh, the up-pramukh of Marwan block where the site is located. Villagers said BSPCB chose the temple venue deliberately to keep away most people who are Muslims. Residents of Chainpur, Parari and Aima Bishunpur then met the district magistrate, Anand Kishore, and convinced him to change the date and venue of the hearing.

On Kishore’s directions, the BSPCB rescheduled the hearing for June 28. The new venue is within Marwan, six km from the site.

The residents are worried the asbestos used in the plant may cause respiratory illnesses and cancer. There are six villages within one kilometre radius of the factory. But the draft EIA report omits this information (see box below). 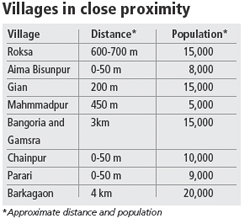 “There are six government schools and two private schools in a radius of 200 metres to 1,000 metres from the site. The EIA failed to address the site sensitivity. The plant will affect the health of children,” said Vasi Ahmed, headmaster of a primary school in Gian village.