Ash flies in the face of power plan 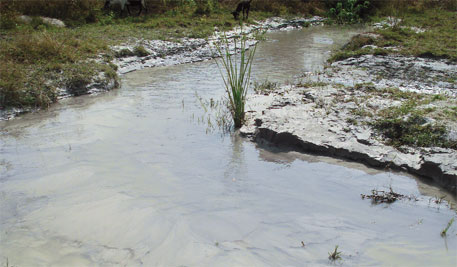 ODISHA is set to become a powerhouse of the country. Over the past seven years, the state has signed several memorandums of understanding (MoUs) with public and private firms to produce 50,000 MW thermal power.

The state is proud of this achievement, but experts are concerned over an environmental threat—fly ash, the notorious waste product of coal-fired plants, known to ruin agricultural land. Odisha may witness production of about 100 million tonnes fly ash annually if all the thermal power projects become operational.

As per the MoUs, 29 private companies will produce 37,000 MW. Public sector major NTPC is expected to set up two plants of 1,600 MW each during the 12th Five Year Plan, and the Centre has sanctioned two ultra mega power plants of 4,000 MW capacity each in the state. What’s more, four dozen captive power plants are in the pipeline. “Regulatory bodies are aware of the impacts of fly ash. Yet consent is being accorded to these plants. This shows corruption at the higher administrative level,” Biswajit Mohanty, an environmentalist based in Cuttack, says.

The administration shrugs off any possible environmental threat, saying all the projects would not materialise. But as per the Orissa State Pollution Control Board (OSPCB), thermal projects with generation capacity of 10,564 MW are in operation. The board has given consent to projects whose combined capacity would be 16,750 MW. In addition, applicants have sought NOCs for projects with collective capacity of 9,906 MW.

The state is already facing trouble in disposing of fly ash produced by existing power plants. Two public sector units, NALCO and NTPC, have failed to address concerns over fly ash disposal and have been put on notice by OSPCB.

Three ash ponds of NALCO, which operates a captive plant in Angul district, are almost full. The plant produces 7,000 tonnes of fly ash every day. The pond safety committee board of OSPCB refused to allow raising of dykes of the ponds. It apprehended NALCO had no space for fly ash disposal beyond May 2012. For a long-term arrangement, NALCO was asked to dispose it in an abandoned mine (mine void). But the plan did not materialise. As a short-term plan, NALCO was advised to utilise the fly ash in infrastructure projects, like road construction and brick making. That too did not happen; evacuating 700 truckloads of fly ash daily was not feasible. Finally, the firm has been asked to fill low lying areas and set up a high concentration slurry disposal system.

Last year, NTPC had to stop power generation at four units in its power station in Angul. One of its ponds had developed a crack due to increased volume. The fly ash seeped out, covering 0.40 hectare (ha). Fortunately, the land was not used for farming.

In future, the problem would not be limited to one or two areas. The entire state would be affected, considering 14 plants will be built in Talcher-Angul, three in Sambalpur-Jharsuguda, 13 captive power plants in Kalinga Nagar and an NTPC project in Sundargarh. For ultra mega power projects, the state is looking for suitable sites in Sundargarh, Bolangir and Subarnapur.

Sidhant Das, member secretary, OSPCB, says, “We are aware of the problem fly ash can cause. We used to give permission for fly ash disposable area of 0.6 ha per MW. Now it has been reduced to 0.10 ha to put pressure on the industries to fully utilise fly ash.”

The infrastructure sector alone would not be able to absorb such high volume of fly ash. “Alert is being sounded in developed countries that it is unsafe to use fly ash in bricks because of its carcinogenic impact,” Mohanty says. Filling of mine voids is the only long-term solution. However, it involves key issues like water to convert fly ash into slurry and laying of pipeline to transfer the slurry to the mine void. “Pipelines need land. Given the experience in land acquisition in Odisha, it would be difficult to dispose of fly ash,” Mohanty says.

Recently, the Union environment ministry asked power producers in Odisha to conduct environmental impact assessment to verify whether the presence of heavy metals in fly ash would pollute groundwater while filling mine voids. Das dismissed any apprehension about groundwater contamination.