...or raw materials for the industries? 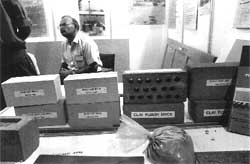 no more ignoring or dismissing fly ash as just an oxide-rich waste product of the thermal power stations. Going by the claims of a recent international conference held in Delhi, India, fly ash can now be used successfully as a raw material for different industries. Since 60 per cent of India's electricity comes from coal-based power stations, the country has a huge stock of fly ash to boast of. Amounting to 60 million tonnes annually, this can be regarded as valuable feed stock for rubber, polymer, glass and paint industry, the researchers revealed at the conference.

Scientists form the Regional Research Laboratory (rrl), Bhopal, India, claim that they have developed a timber alternative using fly ash, jute and polymer, while another rrl group has developed a paint for household purposes (pti Science Service , Vol 17, No 3).

Two more teams - one from Belgrade, Yugoslavia, and the other from Calcutta, India - came out with new ideas for fly ash utilisation in rubber and glass industries. However, this is not the first time that science has found applications for fly ash. Earlier, it proved its effectiveness as a soil conditioner and in road construction.

The rrl team claims that due to its superior structural properties compared to other agro-based materials fly ash is the most suitable candidate for polymer composite, a cost effective replacement of timber. The demand for timber alternatives has skyrocketed during the past few years since the ban on timber usage in construction.

The team, therefore, attempted to develop an alternative called Fly Ash Jute Reinforced Polymer Composites out of fly ash, natural geofibre jute and a fire-proof polymer called acrolite 572. The new material, a durable composite, is both water and fire proof. Utilisation of this new composite can also help in reducing fly ash disposal and deforestation problems and thus prevent environmental hazards, or so claims the rrl team.

A second team from the same laboratory focused on economic and anticorrosive primers that have been made from fly ash and blue dust, a waste product generated by the iron mines. According to this team, the improved abrasion resistance and the other qualities of the paint is essentially due to its chemically inert characteristics. They used fly ash as extender for diluting the paint and blue dust as anticorrosive pigment.

Their results reveal that low-oil-absorption value of fly ash - 19 per cent - reduces the amount of resin needed as a binder without affecting the quality of the paint in any way. Moreover, due to fly ash's low specific gravity, it can be incorporated in the paint without any significant increase in weight, the team claims.

The team recommends replacing conventional extenders with fly ash as this would only improve abrasion resistance of the paint without affecting any of the other qualities - drying time, gloss, thickness and density.

The Yugoslav team has discovered yet another application for fly ash - as raw material for the glass industries, which could benefit greatly from its favourable chemical composition. This team investigated the possibility of obtaining glass fibres from fly ash and their findings showed that a composition containing 43 per cent of silicon dioxide, the chief constituent of fly ash, is capable of vitrification (a process which produces a glossy material) at a temperature more than 700 c.

Besides timber, paint and ceramic industries, fly ash could benefit the rubber industry, claim scientists from Calcutta University's department of chemical engineering. Their research showed that fly ash, including unburnt carbon, is an active and cheap filler for rubber due to its pozzolanic, or hardening property. According to their study, fly ash after pretreatment can be used as the filler, the strengthening agent, in different rubber varieties as its properties are almost comparable to conventional fillers.