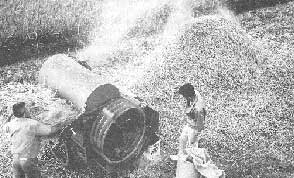 AFTER threshing, rice husk is considered fit only for burning. But scientists at the Delhi-based Shriram Institute of Research have been able to extract an industrially useful product from the ashes of rice husk. They have perfected a process that transforms the waste into an extremely pure form of silica -- precipitated silica -- which has considerable demand in the rubber, plastic and paint industries.

Although precipitated silica is manufactured by about 40 small-scale units in India, production costs are high and the quality does not always pass muster. Says K K Agarwal of SRP industries, which sponsored the research and has filed patents for the process, "Most industries that use precipitated silica have stringent quality standards. In the absence of an assured supply of good grade precipitated silica, they tend to import it from South Korea or Germany."

The details of the process developed by the Shriram Institute scientists are still a closely guarded secret. SRP Industries has set up a Rs 50-crore plant near Varanasi that will eventually produce 40 tonnes of precipitated silica a day.

"Rice husk," says P K Kaicker of the Shriram Institute, "has been utilised largely for generating energy in boilers. But not only is the energy produced low, a large quantity -- almost one-fifth of the husk burnt -- of ash generated is dumped indiscriminately and it is a major source of air pollution."

Rice husk contains almost 20 per cent silica. When burnt, the silica content goes up to almost 90 per cent and from this, precipitated silica of 99 per cent purity can be obtained. According to Kaicker, though there are several ways to convert rice husk ash into precipitated silica, they do not work beyond laboratory-scale operations. The Shriram process uses a special alkaline reactant to "digest" the ash into sodium silicate, from which the silica is precipitated. About 5 tonnes of rice husk is needed to produce 1 tonne of precipitated silica.

The conventional methods of precipitated silica manufacture are energy-intensive. Says Agarwal, "The new process not only cuts energy consumption by almost 50 per cent, it also imparts the best quality to the product."