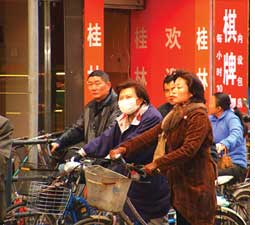 economic boom in Asia has come with a price. Health effects of particulate pollutants in Asian cities are similar--even greater--than those in most industrialized western cities. Effects of gaseous pollutants are also higher in Asian cities. These are the conclusions of a study conducted in Bangkok and three Chinese cities--Hong Kong, Shanghai and Wuhan. It assessed the effects of short-term exposure to air pollution on mortality.

It is part of the Public Health and Air Pollution in Asia (papa) project, undertaken by the Health Effects Institute (hei) in Boston in partnership with the Pasig City, Philipines-based Clean Air Initiative for Asian Cities (cai -Asia). Researchers used health data, including natural mortality and that of cardiovascular and respiratory diseases, provided by health departments. Four pollutants, namely, NO2, SO2, PM10 and O3 were used as air quality indicators. The research teams adopted a common protocol.

PM10 levels were well above who guidelines. Wuhan and Shanghai had the highest PM10 levels. NO2 levels in Bangkok were slightly lower than the other two cities but were above who guidelines. Wuhan reported high O3 levels. Natural mortality was highest inShanghai, followed by Bangkok and Hong Kong. Wuhan had the lowest. But deaths due to cardiovascular and respiratory diseases was the highest in Wuhan followed by Shanghai, Bangkok and Hong Kong.

The combined effects of all the four pollutants were equal or greater in the Asian cities compared to the us cities. The excess risk of mortality for all pollutants in Bangkok was higher than reported in the three Chinese cities. "The results provide important information on pollution related health effects in Asia especially for areas known to have high exposures but are underrepresented in the literature,'' says the study published online on July 9 in Environmental Health Perspectives. Researchers also observed that the effects were stronger for heart diseases than natural causes. The effects of the pollutants were stronger on the aged, particularly in Bangkok.

The second wave of the papa studies has finished in three Indian cities--Ludhiana, Delhi and Chennai. "The results are being analyzed and will be released shortly," says J S Thakur, associate professor, Department of Community Medicine, Postgraduate Institute of Medical Education and Research, who is involved with the papa study in Ludhiana. The researchers say the results will contribute to the international scientific discussion on health effects of air pollution. Multicity studies are very important in Asia as pollution effect estimates for the region can be generated. These in turn can provide relevant estimates of local impacts of environmental conditions to decision makers.