Assembled on a chip

Nanolab can be very useful in formulating several compounds cheaply 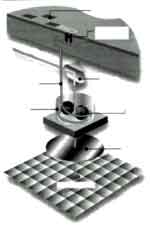 a tiny laboratory would help speed up the searching process for drugs. Researchers at the Orchid Biocomputer of Princeton, New Jersey, usa , have developed this laboratory on a "chip" that consists of 144 chambers. In the new laboratory, a large number of chemical compounds could be synthesised and monitored simultaneously.

The chip contains trays that hold a variety of chemicals. These trays are linked with small channels, valves and pumps to reaction chambers where the new compounds could be formulated. Each chamber is able to process a different chemical reaction. On the basis of the new invention, the researchers are now planning to develop a nanolab with 10,000 chambers within two years ( New Scientist , Vol 156, No 2105).

The cost of conducting research could be cut down drastically as the amount of chemicals and solvents required for the study would be far less than those used during conventional synthesis. One of the major advantages of this laboratory is that the reactions in the nanolab would produce less effluent than that in a conventional plant.

In this laboratory, the researchers have implanted microscopic features into successive glass layers using lasers and chemicals. The overall set-up resembles a tiny chemical plant. The researchers say that the reaction vessels are nearly a few hundred micrometres deep that have a capacity of 10 nanolitres. One nanolitre is a billionth of a litre. The pumps and valves situated throughout the chip, take the form of charged electrodes. They shunt the chemicals around by creating differences in electrical charge.

According to the researchers, the fabrication of the pumps has helped them to develop such a small laboratory. The nanolab does not have any moving part. Chemists will find it easy to conduct research in this laboratory. They would be able to plan experiments and analyse the results instead of using beakers for these purposes. By changing the set-up of the chip, the laboratory could also be used for wide-ranging applications.

The atmosphere in the reaction vessels can be changed from oxygen to inert nitrogen. The researchers say that blockages in the pumps, valves and reaction chambers can be cleared by applying pressure or by cleaning with solvents. However, there are some shortcoming of the laboratory also. The temperature in individual cells cannot be regulated. The researchers are working out a method to overcome this problem.