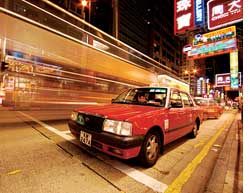 when vehicles accelerate after stopping at a traffic light or a bus stop, the concentration of ultrafine particles increases, says a Hong Kong-based study. Ultrafine particles, less than 0.1 micron in diameter, are a fraction of particulate matter. It is considered as a significant human health concern because of its small size, large numbers and their ability to enter the respiratory tract and the circulatory system. The study aimed to evaluate the exposure of pedestrians to vehicular emissions of ultrafine particles while walking near several high volume pedestrian walkways. The findings were published in Aerosol and Air Quality Research (Vol 8, No 1).

"Sudden acceleration quickly emits a large number of particles. Heavy-duty vehicles such as trucks and buses are more likely to be using diesel and have higher levels of incomplete fuel combustion which leads to more particle emissions," says Tsang. A study conducted on the Los Angeles freeway, which has the highest percentage of diesel vehicles (25 per cent) has also reported such peaks.

"Vehicle acceleration causes much higher particle emission than idling vehicles because acceleration is when vehicles burn fuel in order to move," Tsang adds. While these results are preliminary, they clearly suggest that reducing congestion would contribute greatly to improved air quality in this area thereby diminishing pedestrian exposure to toxic ultrafine particles.