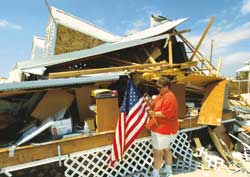 after activists and scientists, now insurance companies have joined the debate on climate change, with this year's storm damage already hitting insurers' bottomlines. The world's two largest re-insurers, Swiss Re and Munich Re AG, are leading a drive to encourage companies to look at the impact of climate change on business, post-Katrina. Swiss Re is looking to incorporate climate change into its plans, and investing in "greener" companies and starting a us $350 million clean energy fund. Skeptics assert insurers are only using climate change as an excuse to raise rates.

With natural disasters more than doubling between 1960-2003, the Association of British Insurers says that by 2080, costs from hurricanes, typhoons and windstorms will jump by two-thirds to us $27 billion a year. For consumers and companies, greater risk will spell higher premiums.