This time it's an Iranian ship 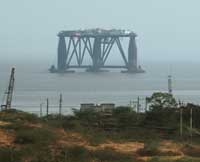 following the French warship Le Clemenceau, an Iranian tanker, M V Rashleigh, is bound for Gujarat's Alang port for dismantling, that has created a controversy.

The ship arrived at Alang on April 9, 2006, but was left stranded in mid-sea as the Gujarat Maritime Board (gmb) denied it beaching permission following a Bombay High Court order. The issue was further dragged into controversy, as the ship -- with its 18 crew members, of which nine are Indians -- had reportedly run out of fresh water and other provisions. Meanwhile mcc Shipping Company, which has bought the tanker for dismantling, has docked it at Bhavnagar anchorage. "Dismantling of the ship will start as soon as the legal problems are sorted out," says R K Jain, owner of Kiran Ispat, which will carry out dismantling of the ship.

Rashleigh is originally owned by the Iran-based Bezandih and Company. It was chartered to a Swedish company Golden Crown to replenish the ship with crude oil for another Sweden-based firm Vital Oil Company. However, on the way, oil spilled out of the ship due to a leakage and it faced some technical failure. The cargo was shifted to another vessel in mid sea and Bezandih sold it to Alang's mcc S hipping for scrapping. But subsequently, Golden Crown filed a legal suit against Bezandih for loss incurred due to oil leakage and delayed supply.

This legal suit prompted the Bombay High Court to order that status quo be maintained and stayed the scrapping.

A Greek-owned ship, Ariel, is also reportedly lying offshore to be broken at Alang.

Meanwhile, a 15-member special team, headed by the Union environment and forest secretary Pradipto Ghosh, is on its first visit to Alang's ship-breaking yard. The team, formed by the Supreme Court during the hearing on Le Clemenceau , will see if the ship-breakers are adhering to environmental norms.

It will also visit the infrastructure facilities at the port and inspect safety measures adopted. This apart, the team will hold discussions with officials of the Gujarat Maritime Board, the state pollution control board and other authorities concerned.

The central government team will submit its report to the Supreme Court in two months time.