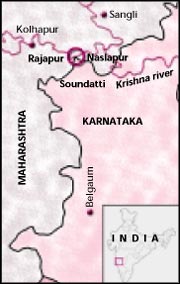 a recent midnight attack on Maharashtra's Rajapur barrage by farmers belonging to the neighbouring state of Karnataka has fuelled fears that future wars of the world will be fought over water. On March 26, around 400 residents of Soundatti and Naslapur villages, in Karnataka's Belgaum district, crossed over to Maharashtra in seven four-wheelers. While the movement took place under the cover of darkness, 20 motorcycle headlights guided the operation that followed. The villagers removed 35 wooden planks from the barrage's 65 gates.

As the water of Krishna river, on which the structure stands, began gushing into Karnataka, the farmers shouted: "The dam is just the beginning, much more destruction is in the offing." According to the police's report, a fierce clash ensued between the attackers and the villagers of Rajapur, which is sited in Maharashtra's Kolhapur district. Seven Karnataka villagers were thrashed before being handed over to the Maharashtra police. Many youths from both sides were injured. The violence continued for three hours.

By the time the barrage gates were repaired, almost 1 million cubic feet of water had flowed into Karnataka. The total loss due to the incident was about Rs 25 lakh, reveals N V Raval, executive engineer, irrigation department, Maharashtra. It may be noted that this was the second attack on the barrage. Farmers from the same area had attempted to tear it down with a bulldozer on May 22, 2003. But then too, they were stopped by Rajapur villagers.

"The Karnataka government has made our lives miserable," laments Bahubali Patil, who was caught while dislodging the barrage gates. The situation, which the farmers describe as a "do-or-die battle", has its roots in the persistent dry spell in both states for the past three years. Of Karnataka's 27 districts, 18 are affected by drought. "As many as 139 out of 1300 villages are facing water scarcity in Belgaum," says B S Palaksha, Belgaum's district collector.

A committee comprising district collectors and irrigation engineers from the two states decides matters regarding water-sharing at the Rajapur barrage. The structure stores around 200 million cubic feet water but the amount has decreased this year due to scanty rainfall.

As per an arrangement worked out in February, Karnataka was to discharge 2 thousand million cubic feet (tmc) of water from Almatty reservoir on Bhima river near Bijapur to solve the water crisis in Maharashtra's Solapur district. In return, Maharashtra was to release the same amount in instalments from the Rajapur barrage for Belgaum.

But Maharashtra's irrigation minister, Ajit Ghorpade, alleges that Karnataka failed to honour its commitment initially. It was only after the Rajapur attack that the Karnataka government ordered the release of 1 tmc water. Although Karnataka's irrigation secretary, S J Channabasappa, conceded that there was a delay in the matter, he claimed he was not aware of the Rajapur incident. But Palaksha candidly condemns the attack, saying: "The Maharashtra government is always cooperative. Our (Karnataka's) farmers should have been patient."

Several groups with one common interest -- the waters of the Krishna -- are said to have instigated the attack. Many believe that the sand miners of Belgaum masterminded the incident. A Belgaum official explains that this section is upset because sand mining has been banned in the district due to the river's low water level. The growers of sugarcane, a water-intensive crop, also allegedly played a key role in the attack. "The irrigation of sugarcane is the real motive behind the agitation," says Dashrath Parekar, executive editor of the daily Lokmat in Kolhapur. Significantly, Belgaum produces around 6 million tonnes of sugarcane annually.

Even as the face-off has ended for now, tension continues to simmer. On March 29, Rajapur villagers held demonstrations and warned their government against releasing more water to Karnataka. On the other side, 5,000 farmers gathered in Belgaum under the banner of the Krishna Rayat Rakshan Samiti (krrs), a group aiming to protect farmers in the Krishna river belt. They were demanding the release of water from Maharashtra's Koyna dam. When the police tried to disperse them, the mob turned violent. The resultant clash left around 200 people injured.

Most politicians of Karnataka are supporting the krrs in view of the coming assembly and parliament elections. But farmers want concrete action and have threatened to disrupt election activities. Ironically, Suresh Prabhu is contesting the general elections from Rajapur after having resigned as head of the task force on river networking (see: Mixed tidings). Meanwhile, security has been tightened at all dams and barrages in both the states.