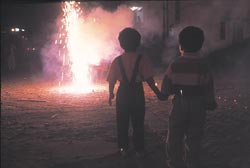 this year too, Diwali turned out to be a smoggy affair in Delhi. Pollution monitoring by the Central Pollution Control Board (cpcb) showed that the level of respirable suspended particulate matter (rspm) doubled from 432 microgrammes per cubic metre (g/cum) to 851 g/cum at ito crossing on the eve of Diwali. cpcb findings show that the situation was worse at Ashok Vihar, where rspm levels rose from 421 g/cum to 1,082 g/cum (see table : Smoky cauldron ) . Noise levels in most localities in the capital too exceeded the limits prescribed by the cpcb. While the level stipulated by the board for a residential area is 50 many areas surpassed it. Lajpat Nagar recorded the highest decibel (db) level -- 82 l eq dB (a). Even the silence zone of the All-India Institute of Medical Sciences recorded high noise level at 74 l eq dB (a).

D K Biswas, chairperson of cpcb, admits that the prescribed guidelines as per the Environment (Protection) (Second Amendment) Rules, 1999, were not followed by firecracker manufacturers this year as well. "Recent tests of firecrackers at the New Delhi-based National Physical Laboratory (npl) show that most of them generate noise higher than the notified 125 dB limit," says G K Mendiratta, environmental engineer, cpcb.

Meanwhile, firecracker manufacturers have their own grievances. "No testing procedures for firecrackers have been specified. Even the instruments to monitor noise levels are expensive, costing around Rs 5 lakh each," says K Mariappan, joint secretary, All-India Federation of Fireworks Association (see: Down to Earth, Vol 11, No 7, August 31, 2002).

"Though there are rules for noise pollution from firecrackers, guidelines on air emissions from the same are not in place," laments Biswas. At present cpcb is devising norms, which will specify the type and amount of materials that can be used in a firecracker. But more than the absence of rules, the problem lies in the lack of will power to implement the existing norms.

Tamil Nadu is the exception. It has shown that if the authorities are committed, rules can be enforced. As part of a campaign against bursting noisy crackers in the silence zones of the state, the Tamil Nadu Pollution Control Board issued closure notices to 24 industries which had manufactured crackers over the 125 dB limit.