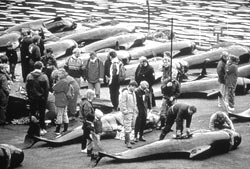 the 54th annual meeting of the International Whaling Commission (iwc) proved to be a foamy five-day affair, keeping alive its tradition of controversies and disputes. Tempers frayed, opinions clashed and the outcome was a deadlock.

Though the meeting had a hectic agenda, the setbacks underlined the ever-deepening rift in the iwc. Nations eager to hunt whales and those wanting to protect them jostled for control over the regulatory body. Held from May 20-24, 2002, in the Japanese whaling port of Shimonoseki, the key issues included lifting of the ban on commercial hunting of whales, construction of whale sanctuaries and hunting by indigenous people.

Notably, the recent meet saw the strengthening of the whaling lobby with new countries joining Japan to heighten the pitch for commercial hunting. But hopes of widening the scope for whaling were dashed when the commission rejected Japan's plea for an expansion of their hunting activity. The decision was welcomed by conservationists as, apart from the 540 minke whales that Japan hunts every year for ostensible research purposes, it wanted the quota to be increased by 50. It added 50 Bryde's whales and 10 sperm whales to its hunting list in 2000. To further strengthen thewhaling lobby, Japan is alleged to have bought over votes of six Caribbean countries in exchange of aid.

The us, too, drew flak from both conservationists and the whaling lobby for adopting double standards. While it opposes whaling by indigenous communities in other countries, domestically it allows Makahs and Eskimos to hunt grey and bow-headed whales, respectively. This in spite of the endangered status of both these varieties. Consequently, the proposal for extension of the current quota for another five years by Russia and the us was denied by the iwc. "Almost three days were wasted on the issue," said S C Sharma, director-general, wildlife, Union ministry of environment and forests, who represented India at the meet. "Now, if Japan speaks up against whaling indulged in by Russia and the us, it is justified in doing so," he added.

Sadly, the revised management scheme (rms) to regulate whaling was drowned in the din of the us-Japan spat. Its adoption -- which was high on the meet's agenda -- could not, therefore, be translated into reality. Describing India's stand as pro-conservation, Sharma said that it was in favour of rms being subjected to further refinement.

The highlight of the meeting though was a walkout by Iceland in protest against the iwc's refusal to make it a member. Upset over the commission's anti-whaling stance, the country had quit the iwc 10 years ago. It rejoined the panel last year and hoped to gain a full membership this time round. However, its refusal to accept the 1986 moratorium on commercial whaling cost it dear as it was allowed to be present in the meeting only as a non-voting observer.

The anti-whaling lobby suffered a setback when New Zealand and Australia's proposition for a whale sanctuary to protect its breeding grounds was voted down.

The panel, formed in 1946 under the International Convention for Regulation of Whaling (icrw) was initially meant to regulate whaling for sustainable harvest. However, after whale populations all over the world decreased due to massive hunting, the iwc banned all commercial whaling for an indefinite period to help its populations recover.

But on the pretext of scientific research to assess the impact of whales on its fishery resources, countries like Japan and Norway continue whaling activities. The argument given by these countries is that whales gorge on other fish species, leading to a severe depletion in their fishery resources. They also contend that varieties like the minke whale are not endangered and can be hunted in a sustainable manner.

Unfortunately, none of these issues have been handled tactfully and hence a consensus has eluded successive chaotic meetings of the iwc. The consistent failure of this global regulatory body (see Down To Earth , Vol 10, No 7, August 31, 2001) means that the largest mammal on Earth is in for anything but a whale of a time.