At the mercy of chromosomes

Sets of it decide whether a plant will dominate or vanish 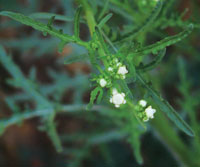 PUZZLED why plants like congress grass, or Parthenium hysterophorus, spread fast? Any attempt to remove it is a failure as it would grow back quickly, while a plant like bracted arrowwood (Viburnum bracteatum) is slow to spread.

Biologists now have an answer. They say it all depends on how many sets of chromosomes a plant species has. This decides whether the plant is in danger of becoming rare or invasive. Until now, ecologists had little success in finding reliable indicators to predict species vulnerability. Most attempts have focused on taxonomic or ecological traits such as the size of the geographical area that the species is found in. Some took genomic traits into consideration. But all have proven “unequivocal”, says Maharaj Pandit, lead researcher and a plant ecologist at the University of Delhi.

The researchers collected existing chromosome data on 640 endangered species and 9,000 related species. They collected the same chromosomal data for 81 invasive species and 2,300 of their relatives and studied the differences in chromosomes. The study was published in Journal of Ecology.

“Polyploids have better growth, higher reproductive rate and more chemical compounds to inhibit growth of other species and hence invasive,” Pandit adds. He notes commercial species like wheat have been polyploidised for better performance in agriculture and horticulture.