At the receiving end 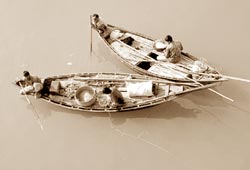 All of these enter the Bay of Bengal, carrying large volumes of water and silt. An extensive network of khal and beel (canals and wetlands) helps channel floodwater for agriculture and fisheries. The two systems are, therefore, central to Bangladesh's flood plain ecology. Simultaneously, a constant flow ensures silt removal, while the level at which rivers flow bear on navigation activities and groundwater recharge.

The vast flooding experienced by Bangladesh during the monsoon is not caused by local rainfall; it takes place as a result of water carried by rivers into the country. A total of 57 rivers enter Bangladesh, which is landlocked on three sides. Out of these, 54 rivers originate in India. Thus any intervention in the Himalayan river system in India is bound to affect Bangladesh. What needs to be ascertained is the extent of disturbance that the process is likely to create.
Questions were first raised about India's river networking scheme during the Third World Water Forum at Kyoto in March 2003, where both Nepal and Bangladesh expressed reservations. Interestingly, at the same meet, the river basin-sharing issue was also discussed widely. It was argued that unilateral intervention in river basins shared by more than one country should be avoided, as it leads to trans-boundary conflicts. A possible list of such zones was mentioned and the Ganga-Brahmaputra-Meghna basin figured in it.

Fearing an adverse fallout from the project, in September 2003 the Bangladesh government asked the Dhaka-based Institute of Water Modelling (iwm), a consultancy group, to find out the extent of likely damage. iwm used a default model of the Bangladesh river system as it runs currently. "We had to change the variables according to the river-linking project's proposed quantum of water withdrawal, since that amount won't be available to us," reveals Emaduddin Ahmad, the executive director of iwm. "But it was important for us to be aware about the amount of water transfer that would take place in each basin; merely knowing the total was not enough," he adds.

Another crucial bit of information the model-makers didn't have was the timing of the transfer, as water required for various activities is always season-specific. Not surprisingly, unavailability of this data seems to have raised the hackles of experts in Bangladesh. But unlike anti-river linking activists in India, iwm conducted extensive research using the basic data available in the public domain. It also studied India's agricultural pattern to understand the timing of water withdrawal, and so came up with a model that ran on various options.

Bangladesh has an annual average water endowment of 1200 billion cubic metres (bcm). Almost 93 per cent of this is through the 57 rivers entering from outside. According to published data, India is supposed to transfer about 224 bcm of water annually from Himalayan rivers, which is 25 per cent of the annual water endowment from the Ganga and Brahmaputra rivers.

There has been a major public outcry in Bangladesh over the siphoning of Ganga water by India through the Farakka barrage. With southwest Bangladesh reeling under increased salinity because of the low flow of the Ganga, the likely impact of the river-linking project on the flow of the Brahmaputra is fresh cause for concern.

Jahir Uddin Chowdhury, a professor in the Institute of Water and Flood Management of the Bangladesh University of Engineering and Technology (buet), is categorical about the expected damage due to any water transfer from the Brahmaputra (see table: Gauging the depth): "The effect of the Farakka barrage will be negligible compared to that of tinkering with surplus water in the Indian Brahmaputra." Crucially, the river gives Bangladesh about 60 per cent of its water endowment.

The main water requirement in peninsular India is between January and May, a dry season for the Ganga-Brahmaputra basin. But transferring and storing water from the Himalayan rivers during the wet season for later use would be a gigantic task. This has given rise to the fear that water will largely be transferred during the latter part of the wet and dry seasons. "There is already a precedence of withdrawal of water during the dry season from the Ganga," points out a water expert from a local non-governmental organisation.

The iwm model, which was shown to Down To Earth , predicts that by the end of September there will be hardly any water in river Padma and a 22 per cent reduction in flood in the north-central region of the country. This would create major problems for agriculture and fisheries. Worse, it would result in a five-metre drop in river level, making navigation difficult. Since two-thirds of the country is cultivable and the agricultural sector is the largest employer followed by water transport, the country could face economic disaster.

With the low-flowing rivers being unable to flush silt, the mouth of tributaries and internal rivers will be blocked. The post-monsoon drop in riverwater levels will initiate a reversal of groundwater recharge, with river levels falling below the groundwater table.

The healthy flow of rivers also prevents seawater incursion. The southwest region already suffers excessive salinity, wreaking havoc on the mangrove ecology of the Sundarbans. If India embarks on its ambitious river-linking plans, the model predicts, salinity is expected to advance inland and move towards the south-central and southeast areas too. As Hafizuddin Khan, Bangladesh's minister for water resources, points out, "Almost three-fourth of Bangladesh will be affected by salinity and in turn, will trigger mass migration to the northern part of the country." The alarming situation expected is because 90 per cent of the water required to control salinity intrusion in the Lower Meghna river comes from the Brahmaputra.


It is obvious that reduced water endowment in Bangladesh will have an adverse socio-economic impact. Expectedly, Prime Minister Khaleda Zia has requested opposition parties to support the government in this matter. The Bangladesh government has also talked about seeking redress at international fora. "But, we should try our best to solve the deadlock at a regional level among countries who will be affected by the project," says Khan. He is hopeful of the new government in India: "We sincerely believe that India will not do anything that will create large-scale misery for Bangladesh."

The country has come out with its National Water Management Plan that looks at the optimum utilisation of water in a holistic manner. But it is estimated that almost 60 per cent of the investment required to make the plan a success will be rendered redundant if the Indian river-linking scheme comes to fruition.