Biotech companies and the World Trade Organisation took centrestage at the fourth conference on biological diversity, leaving traditional communities to fend for themselves 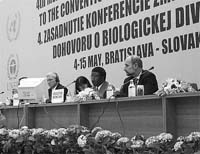 it threw up more questions than it set out to solve. The focus of the discussion at the fourth conference of parties (cop) to the convention on biological diversity (cbd) held in Bratislava, the Slovak capital, from May 4 to 15, was the sharing of benefits derived from biological resources with indigenous and traditional communities. Though 172 countries signed the cbd five years ago to preserve and sustainably use biodiversity, benefit-sharing with traditional communities - which comes under article 8 (j) of the cbd - remains a contentious issue. International players, such as major biotech companies and the World Trade Organisation (wto), who set the rules of the game, are yet to recognise the rights of the indigenous communities.

Several non governmental organisations (ngos) allege that the wto deals with governments, not communities. Participants at Bratislava discussed how the cbd should interact with all other conventions including the wto.

Traditionally, local communities preserve, control and enjoy ownership rights over animals and plants in their area. Intellectual property rights do not cover the traditional knowledge base of local communities. This allows international companies to exploit the resources and use the knowledge of indigenous communities to manufacture high-value products without giving these communities any share of the profits. Worse, many countries are yet to enact their domestic laws recognising the rights and practices of local communities.

The us played a very subdued role for the first time, which is very surprising. All clauses pertaining to article 8 (j) were discussed. Benefit-sharing was discussed but no action was taken. However, it was decided to set up an adhoc working group which will meet before the next conference of parties to study this issue and report on it for further negotiations. "Article 8 (j) deals with extremely complex issues. The requirement and priorities of the communities across the globe are so widely divergent and complex, that it is perhaps wiser to leave space for debates and discussions before a concrete agenda is set," says R S Rana of the World Wide Fund for Nature, New Delhi.

To say that the performance of the Indian contingent was lacklustre, will only be an understatement. Despite all the hype in India over the patenting of basmati and neem in the us, the Indian environment minister, Suresh Prabhu, returned without achieving anything. Critics allege that the Indian minister was not even aware of many issues that were discussed at the conference.

Another issue that attracted a great of deal criticism and protests from the ngos was the entry of "terminator seeds" into the agriculture sector. "Terminator seeds" denotes a particular variety of hybrid seed that becomes sterile after one season, making their replication impossible. Some us-based companies are reportedly introducing such terminator seeds in developing countries. "This will be disastrous for the farmers because they will be forced to buy them every season, while the multinational corporations mop up the profits," says a spokesperson of the Rural Advancement Foundation International , a Canadian ngo. In the ministerial round table meeting, Angela Merkel, the German environment minister, wanted sustainable tourism be included as an element of biodiversity conservation programmes. The round table meeting was divided into two groups. One was headed by Angela Merkel and the other was headed by Suresh Prabhu.

The cbd signatory nations have decided to keep a vigil on whether trade liberalisation will have an impact on agricultural biodiversity and on farmers. Signatories, therefore, have a big task ahead of them before they meet again after two years. The going may be tough as the us, which is a major player in the multi-million dollar global biotech industry, has not signed the convention. Signatories to the cbd will now have to cajole the us into their fold and mend fences with the wto.

There were many rough moments at Bratislava. For example, Brazil asked the representatives of indigenous communities to leave when the formal discussions began. Later, it was decided that the indigenous groups would participate in the inter-sessional working group on benefit sharing.

Were the indigenous groups satisfied with what they got ? "The general feeling was that it was only a halting step forward - but at least at long last it was taken," says Ashish Kothari of the Indian Institute of Public Administration, one of the few Indian ngo representatives present in Bratislava.

When the cbd met last in 1996 in Buenos Aires, the Philippines and the Andean Pact countries had claimed to have passed executive orders with regard to 'access legislation'. Since then, no other country has passed biodiversity access legislation.