The Africa Mountain Atlas uses hundreds of before and after photographs, detailed maps and satellite data from 53 nations to highlight the problems of the continent’s mountainous regions 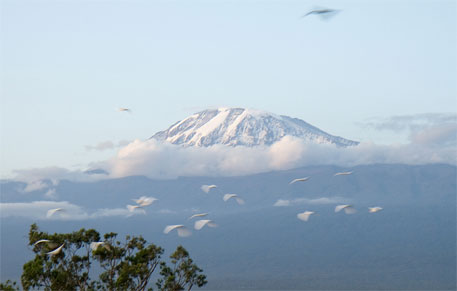 African mountain ecosystems are facing development challenges and for the first time, it has been clearly brought out in a new atlas compiled by the United Nations Environment Programme (UNEP).

The Africa Mountain Atlas uses hundreds of before and after photographs, detailed maps and satellite data from 53 nations to highlight the problems of the continent’s mountainous regions, a UNEP report says.

The problems include earthquakes, landslides in Mount Elgon and Rwenzori Mountains, volcanic activity and receding glaciers. Research shows that around 27 per cent of Africa’s mountainous areas are prone to destructive earthquakes.

Ironically, the population density in hilly areas is more than triple than that in the lowlands, according to the UN report. Take the example of Rwanda which is one of Africa’s most mountainous nations. Here the available arable land per family is 0.6 hectares, with 25 per cent of families possessing less than 0.2 hectares.

More about the atlas and what it contains

The atlas has been prepared in cooperation with the African Union, the Swiss Agency for Development and Cooperation, the Government of Norway, Austrian Development Cooperation, United States Geological Survey, University of Bern and Albertine Rift Conservation Society. The 291-page atlas contains information about the role of mountain ecosystems in African economy.

The atlas also features 65 maps, 73 satellite images, 50 graphics and hundreds of photographs. The before and after images, some of which span over three decades, offer striking pictures of how the local ecosystem transformed in several mountainous areas.

Besides the challenges being faced by mountain ecosystems, the atlas also shows solutions and success stories from across the continent. It highlights how strategic innovations are improving food security and livelihood of communities living in the mountains.

The atlas also shows how traditional know-how is being used to adapt to climate changes on Mount Kenya, on the Simien Mountains in Ethiopia and the Usambara Mountains in Tanzania.

An estimated 97 per cent of Cape Town’s water supply relies on surface water from the mountain catchment areas. Cape Town wraps around Table Mountain National Park, the largest urban park in South Africa and a popular tourist destination. However, population growth has placed a strain on water resources and future climate change could have an impact on stream flow, evapotranspiration rates and rainfall pattern. Already, the city has had to expand its reach to satisfy its demand for water.

According to the analysis in the Africa Mountains Atlas, many of the continent’s water towers are under extreme pressure as a result of deforestation, open cast mining and encroachment.

The atlas presents challenges and opportunities for Africa as the continent strives to enhance the livelihood opportunities of mountain communities and the services derived from mountain ecosystems.

According to the atlas authors, there are 468 national parks in Africa. Out of these, 125 or about 27 per cent, are found in the mountains.

Some of the mountainous regions are biodiversity zones. The Albertine Rift region has 2,000 to 3,000 species, out of which 1,175 are endemic plant and animal species.

The eastern coast of Madagascar is also a dense biodiversity zone.

Africa’s mountains are home to some of the most biodiverse tropical montane forests in the world.

Out of the 44 sites listed as UNESCO World Heritage Sites in Danger, five are in Africa’s mountains.

A significant proportion of Africa’s mountain communities are vulnerable to food insecurity. There is a need for more financing mechanisms to help preserve resources that support livelihood.

Changes in climate like increased temperature and rainfall are affecting Africa’s mountain ecosystems. Take the example for Mount Kilimanjaro. Loss of glacier cover on this mountain since 1880, from over 40 square kilometres to the present size of 1.8 square kilometres, can be attributed to the reduction in precipitation and air humidity moisture. Changes in solar radiation continue to contribute to both ice thinning and the lateral retreat of Kilimanjaro’s ice cliffs, as it did in the last decades of the 19th century. Warmer near-surface conditions and rising temperatures at lower latitudes are also driving glacier decline on Kilimanjaro.