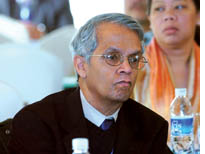 Atmospheric scientist V Ramanathan fromthe Scripps Research Institute, California, USA, says brown clouds heat up the lower atmosphere. He explains to Archita Bhatta how the media misinterpreted their findings
It shows the atmospheric brown clouds (ABC) enhanced solar heating of the lower atmosphere by about 50 per cent.
Earlier, it was held that ABCs have a cooling effect on the surface. Our results do not contradict this, but shows ABCs cool the surface over most of the Asian plains, while warming the overlying free atmosphere. Absorption of solar radiation by ABCs heats the free atmosphere (1-5 km above the surface). As observed from satellite sensors, air pollution originating from Asia is responsible for this warming. The media got the science wrong.
We do not have a enough records to answer this. However, our limited data shows brown clouds are not decreasing.
This is the implication of our study, at least in elevated regions like the Himalaya. ABCs would lead to additional cooling over the surface (in the plains of South Asia), and more warming over the elevated regions such as the Himalayas. We used satellite and ground-based observations for over five years, and simulated the impact of ABCs on climate. We integrated the emission history of soot for the last 70 years into the model and simulated the Asian climate from 1930 to 2005 with and without brown clouds. These simulations show that ABCs contributed as much as greenhouse gases did to the warming trend--1-5 km above the surface. This is the elevation of glaciers of the Himalaya and the Hindu Kush.