May cause increase in desert areas 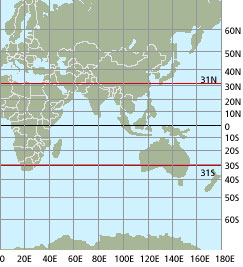 rapid atmospheric warming is causing a widening of the tropical region, according to a team of researchers led by the University of Washington in the us .

The scientists analysed satellite data from 1979 to 2005 on temperature over subtropical areas (between 23.5-35 latitudes on both sides of the equator). They found that the troposphere -- part of atmosphere where weather phenomena occur -- was warming faster in a band around 30 latitude in both hemispheres. The data was taken from the us National Oceanic and Atmospheric Administration satellites.

Higher tropospheric temperature was affecting the jet streams -- high-velocity winds moving from west to east at altitudes of 12-16 km -- that separate tropical from the temperate regions. The study found that each hemisphere's jet stream has moved towards the pole by about one degree latitude or about 110 km, thus widening the tropics. The increase in tropical area is estimated to be almost twice the size of India. "If they (jet streams) move another two to three degrees poleward in this century, very dry areas such as the Sahara desert could be nudged toward the pole, perhaps by a few hundred miles," says Qiang Fu of the University of Washington.

However, the research team is not yet sure whether the movement of the jet streams can be taken to be evidence for global warming. But Fu agreed that the troposphere was warming faster than can be accounted for by natural processes. The study was published in the May 26 issue of the journal Science (Vol 312, No 5777).

A poleward shift of jet streams is strongly supported by climate models, but they predicted fastest warming in the equatorial upper troposphere. The new research suggests that faster subtropical warming could also shift temperate cyclones polewards. That could have a long-term impact on rainfall.