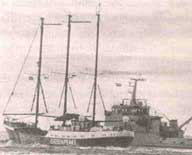 FRANCE's nuclear testing shenanigans the Mururoa atoll have caused an international furore (see Down to Earth, 31, 1995). Among the most hostile ics of the French moves on the atol the international environmental gram Greenpeace. The group claims that 45 founder David McTaggart and 2 grove members had infiltrated the atoll on an inflatable speedboat.

Greenpeace suffered some daw ages too. About 150 French naval ccw manclos stormed the group's 180-foot ship Rainbow Warrior on July 9 as dt steamed into France's exclusion zone around the Mururoa atoll test site- After a fierce tear-gas attack, the codw manclos reportedly smashed up parts a the ship and took 11 crew members into custody. Later, the ship was allowed to proceed to Tahiti, where a joined an international anti-nuclear rally held on July 14 (Bastille Day).