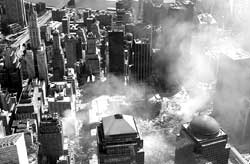 Even after a month of the terrorist attack, carcinogenic benzene was found to be 58 times higher, at one site close to ground zero, than the US Occupational Safety and Health Administration's (OHSA) permissible exposure limit. Levels of benzene at three spots around the site were 42, 31 and 16 times higher than the OHSA standard.

High levels of dioxins, PCBs, benzene, lead and chromium have also been found. The detected asbestos in the air, however, did not exceed national safety guidelines.

The data was collected by the US Environment Protection Agency.

The long-term effects of relatively short-term exposure to chemicals such as benzene are unclear. But the EPA recommends that all rescue and cleanup workers should use respirators.