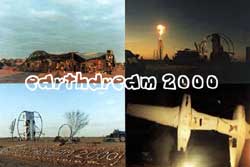 IN THE midst of the Australian desert, a group of musicians play live music powered by a solar power system. The large images projected on the screen are operated by a wind power system. The truck in which they travel from forests to deserts runs on vegetable oil. That is the Australian band LabRats for you, just out with their first album 'Combat Wombat'.

This unique wandering music group with their mix of alternative music, powered by natural energy is the ultimate expression against the rat race. A band with a cause, they are also actively targeting various environmental issues. With their alternative music the group takes up issues like logging to aboriginal rights to toxic dumping.

LabRats is on the extreme, a social force against corporate synthetic culture. Their music is techno, hip-hop; dance music in operative terms. Part of the contemporary Australian rock music, they have gone back to the roots of underground music, which was always a facet of resistance.

The band is in the genre of celebrated group 'Midnight Oil', whose leader is a key functionary of global pressure group Greenpeace International.