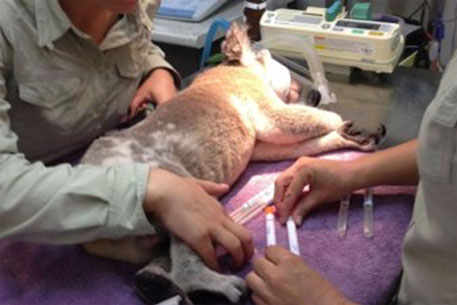 Scientists in Queensland, Australia have successfully tested a vaccine to protect wild koalas from chlamydia, a deadly and painful sexually-transmitted disease, a report on the BBC said on Thursday.

According to the report, microbiologists from the University of the Sunshine Coast in Queensland gave 30 koalas the vaccine while 30 others were left unvaccinated.

All 60 were then fitted with radio collars so they could be monitored in their natural habitat at Moreton Bay, north of Brisbane.

Of the 30 vaccinated, some were already infected with chlamydia, some were healthy and some were showing symptoms of the disease such as eye and reproductive tract infections.

Researchers found that seven out of eight koalas suffering from eye infections who received the vaccine, showed an improvement.

They also found that koalas infected with the chlamydia strain did not go on to develop the full-blown disease after they were vaccinated.

Peter Timms of the University of the Sunshine Coast, who spent five years on developing the vaccine, said chlamydia was one of the "tipping points" contributing to the decline of the animal and it was crucial to stop its spread.

"The vaccine would actually make a difference," he said.

According to the most recent estimates, there are now only 43,000 koalas left in the wild in Australia. At least 50 per cent of all koala deaths in the last 2 decades have been due to chlamydia.

Researchers intend to continue the trial in areas where koalas are most at risk.