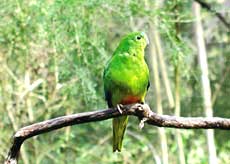 Australian environment minister Ian Campbell's endeavour to save the orange-bellied parrot, an endangered migratory bird to the country, is drawing criticism. The state government of Victoria has accused Campbell of using the rare bird to block the state's Bald Hills wind farm, worth us $220 million. Campbell had blocked the wind farm in April saying the wind farm project, located in the South Gippsland region, threatens the parrot and its habitat. Later, in August first week, he announced funds of us $3.2 million to protect and expand the bird's habitat. Campbell's strategy includes working with landholders in the parrot's Victorian and South Australian winter base and conserving its breeding and nesting habitat. Victorian premier Steve Bracks criticised Campbell saying that if he genuinely wanted to save the parrot, he should have made the announcement earlier.