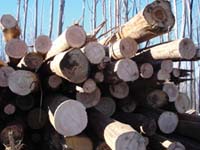 While still unwilling to commit itself to the Kyoto protocol, Australia has announced a $200 million (us $160 million) to help fight illegal logging to slow global warming.

The fund, known as the Global Initiative on Forests and Climate, is one of the largest funds established by a government for reducing tropical deforestation. The project is in the direction of a proposal put forth by a coalition of developing countries at climate talks in 2005, and primarily targets developing countries like Indonesia and Papua New Guinea where forest loss is the highest. Australia's initiative, however, is drawing flak from its own state governments, which have termed the step as "a stunning piece of hypocrisy of the federal government, given the clearing of forests still taking place in Australia".

In a similar announcement, Britain has said it will invest nearly 50 million (us $100 million) in an initiative to protect the Congo rainforest, the second largest tropical forest in the world. The project will be led by Nobel Prize winner Wangari Maathai, a Kenyan environmental activist. Chancellor Gordon Brown said the funds will help fight deforestation while improving the livelihood of about 50 million people in central Africa.