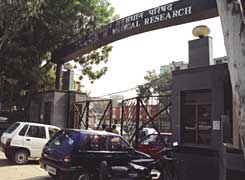 a report by an appraisal committee identifies lack of autonomy as a major reason for poor performance of Indian Council of Medical Research (icmr), the premier government body in charge of medical research in the country. The committee suggests the organisation would be better equipped to address new health threats if it's made an independent department under the Union ministry of health and family welfare (mohfw). The committee was formed at the behest of the Planning Commission when icmr demanded more funds for research at a recent expenditure finance committee meet.

The committee submitted its report to the Union health minister on October 17, 2005. If icmr is made into a full-fledged department, it would have functional autonomy preventing delays in research. Currently, icmr is among the many institutes under the mohfw and is controlled by a joint secretary. Lack of autonomy and scant funds have also resulted in good researchers not joining it. "We don't have many researchers from the medical professional now; this affects research quality," says an icmr official. The minister is yet to decide on the recommendations.