The world is soon to herald the revived version of a flying machine called the airship which had been relegated to the annals of history. These German-crafted machines are being lauded as a new form of air transport 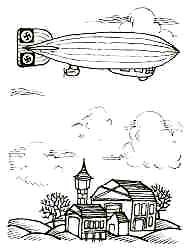 AIRSHIPS (dirigible powered balloons having a rigid elongated structure) are all set to take on the skies. The lighter- than-air craft is being manufactured by Zeppelin Luftschifftech1:1ik at Friedri- chshafenin southern Germany. During the '20s and '30s, airships were the fastest means of crossing the Atlantic - doing so in two days. The trial of the new airship in the next few months will reveal public reaction to the idea of these huge gas-filled ships sailing through the s~once again. Despite the fact that the Zeppelin factory in Germany was bombed by the British Royal Air Force in 1940 -during World War II -Zeppelin's engineers had kept the concept of the airship alive.

.Named LZ No7, the ship has been under construction for the past three years. More than 20 applications are being envisaged, ranging from oceano- graphic surveys to leisure trips. At 68m, the LZ No7 is almost as long as a jumbo jet, but will carry just 12 passengers and t'Vo pilots. It will fly at a maximum speed of 140 kmph and a cruising alti- tude of 2,500 m.

Zeppelin's engineers say that the craft's new design would make it much safer and more manoeuvrable than any of its predecessors. They are using non-flammable helium as the lifting gas and are , employing a number of gas cells within the envelope. The rigid frame of the new airship is being made fro:m much stronger materials. There is also a new vectored thrust unit that facilitates full manoeuvra- bility at even low speeds and a range of sophisticated computer-aided flight control systems. The danger of fire in the cabin is reduced by the remote mounting of the three engines and fuel systems. The airship does not need a hanger. Its outer layer, which is made of Tedlar, a synthetic material developed and patented by General Elictric of us, is extremely resistant to aging. Hence these airships can be parked in the open air.

Landings are expected to be much safer and quicker than earlier. While previous airships needed a mini army of ground staff to bring the craft down safely, the new models will use an extra strong kevlar cable Which will be lowered from the ship and then fIXed onto a large hook on the ground. The pilot will then activate an on- board winch that will lower the ship automatically. Zeppelin executives believe that the new range of airships could be used to monitor air pollution because they can remain suspended in contaminated air for much longer periods than a helicopter. The crafts could hang in the sky and transmit the latest data to the ground. Zeppelin is already planning to build a fleet of larger airships to be called the tzN17 from 1998. Plans are also being laid for the building of even bigger airships which when built will eventually be able to carry 84 people. Although in concept the craft retains its identity, with all the facelifting that it is about to be subjected to it sure woUld be totally in tune with the times.