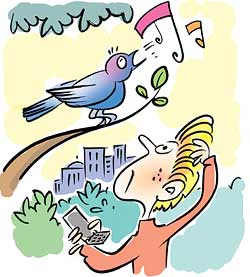 Isn't it possible to mistake a bird's twitter for your mobile ring tone? Yes, for, many wild birds can imitate simple ringtones, German ornithologists report in a study that underscores the influence of humans on avian evolution. These birds can "sing up to 78 different musical phrases, and many of the simplest phone ringtones coincide with them," ornithologist Matthias Werner, of the German government's bird protection agency, told the Latin American weekly Tierramrica. "The common titbird (Parus major) can sing 32 different songs," he said.

Werner said common German birds like the Euroasian jackdaw, the European starling and the Eurasian jay and other Central European countries came into contact with electronically-created sounds as a result of the expansion of urban life.

"It's in the nature of these birds to imitate sounds in their environment that correspond to their own musical capabilities," said Richard Schneider of the nabu Bird Protection Center in Mssingen (600 km south of Berlin). "They can imitate those sounds so well that sometimes it is very difficult to hear the difference," he said.

"The song is useful for male birds not only in the search for a female or to mark its territory, but also as a deceptive manoeuvre when faced with potential danger. For this reason, imitating environmental sounds is part of the daily lives of birds," Schneider explained.

Given the risk that birds might forget their original song as a result of human influences, their songs have been archived in European and North American universities, allowing the possibility of recovering them--a step backwards, perhaps, in the constant process of adaptation that is evolution, ornithologists like Schneider say.