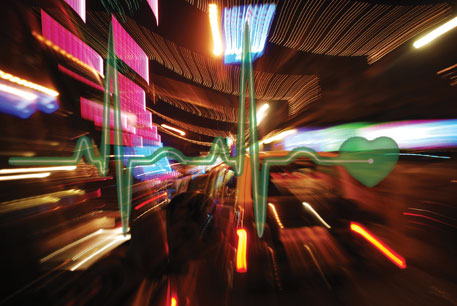 LIVING in a house on a noisy highway can give you more than a headache. The constant din from the traffic can make you prone to heart attack.

Danish researchers have found that long-term exposure to residential traffic noise significantly increases the chances of heart attack in a person. Their study, published in PLoS ONE, found that for every 10-decibel increase in noise, risk of heart attack goes up by 12 per cent. The effect of noise pollution on heart was found to be independent of the effect of air pollution.

The experts did not spell out the exact relation between traffic noise and heart attacks, but made a few guesses. They said noise might cause an increase in stress level and induce sleep disturbances, which over the years can translate into a heart condition.

For their study, the researchers examined 57,000 people between the age of 50 and 64 years from two of the Denmark’s largest cities—Copenhagen and Aarhus. They kept track of many aspects of the participants’ health, like diet and physical activity along with data on places they lived over a 20-year period. Using residential address history, exposure to road traffic noise and air pollution from 1988 to 2006 was estimated for all participants.

The researchers found that 1,600 people suffered their first heart attack during the study period. They figured out a strong link between noise and heart attacks even when other triggers of heart problems like high BMI, low consumption of fruits and vegetables, smoking and use of alcohol were considered in the statistical analysis. “People should practice yoga and other physical exercises that can reduce the stress produced by traffic noise,” says Sanjay Chugh, cardiologist with the Escorts Heart Institute in New Delhi.