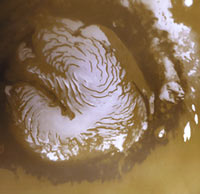 With evidence being unearthed of huge amounts of frozen water below the surface of Mars, the likelihood of life existing on the red planet has increased. The finding made by the Mars Odyssey spacecraft of nasa has solved one of the biggest puzzles: where did the water on the planet disappear? In the past, dried up lakes, ancient shorelines and vast empty canyons were found on the planet. The ice crystals were found exactly where it was predicted -- poleward of 60 degrees south, where the average temperature and soil properties allow ice to form. As a result of this finding, nasa may now commit itself to a manned landing on Mars within 20 years. The ice crystals found measure around one metre and are enough to deluge Mars to an average depth of between 500 metres and 1,000 metres if a meltdown were to take place. Jim Bell from the department of astronomy at Cornell University, says that the subsurface ice "may represent only the tip of the iceberg frozen underground. He adds that "even after only one month of mapping the results are stunning".

The ice may stretch far underground to regions where it is warm, raising the possibility of warm caverns of meltwater in which --scientists hesitantly speculate-- conditions could be suitable for life.