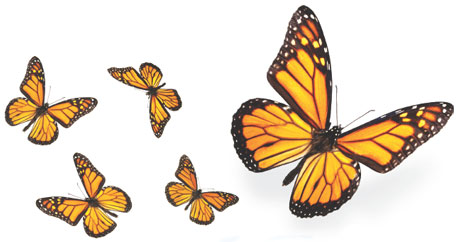 The monarch butterfly (Danausplexippus) holds the awe of scientists as it migrates across the North American continent despite its diminutive size and fragile nature. The time taken to cover the staggering distance is well beyond the average lifespan of butterflies—while one generation migrates during winter, the returning butterflies are of the next generation. Yet, they find their migratory path and destination unerringly, a fact that has been observed diligently by several researchers for the past few decades.

It is widely accepted that the time-compensated sun compass helps butterflies orient themselves. In simple words, the sun’s relative position in the sky and its time variation in relation to latitude and longitude helps guide the insects. But this does not explain how the butterflies manage to fly despite cloudy skies. Even in the absence of directional daylight cues, the migrants have been observed flying in the expected southern migratory direction.

Steven Reppert, Patrick Guerra and Robert Gegear from the University of Massachusetts Medical School, and the Worcester Polytechnic Institute, Massachusetts, worked on a hypothesis that the monarchs could use a “weather-proof” mechanism to guide themselves during cross continental migration from the cold North East US and Canada to Mexico to spend their winters. “We hypothesised that one such back-up mechanism would be the use of a magnetic compass, as found in other long-distance migratory animals such as sea turtles and birds,” says Guerra.

The researchers studied butterflies which were made to fly through a wind tunnel surrounded by a magnetic coil system to see the impact of this extra magnetism on their internal magnetic compass. The researchers found that the antennae play an important role as they contain light-sensitive magnetosensors. The team also realised that a magnetic compass is in play in the navigation and also that this compass is light-dependent. The findings were published on June 24 in Nature Communications.

Uttarakhand-based lepidopterist Peter Smetacek, an authority on Indian butterflies and moths, says the findings are remarkable and fill the gap in our understanding of the world of butterflies. “Within the south Indian peninsula, we have butterfly migrations following a pattern. We have the Himalayan butterflies who descend to the plains during the winter,” says Smetacek. “Some species cross into Europe regularly from North Africa, some like the Dragonfly butterfly fly from the Himalayas to the Maldives, and the next generation goes to Africa, and then the subsequent generations return to the Himalayas via the Maldives,” he adds.

Krushnamegh Kunte, reader, National Centre for Biological Sciences, Tata Institute of Fundamental Research, says, “The migration could only be possible by a complex orientation technique which includes the migration path being ingrained in their DNA. This helps them withstand the onslaught of weather variations and human interferences.”

But a spate of recent studies has indicated that human interference does affect migration. A study on young steelhead trout (Oncorhynchusmykiss) shows that exposure to iron and steel, materials used to construct hatcheries, affects its navigation ability. The ability of the fish to navigate has direct effect on its survival, says Nathan F Putman from the department of fisheries and wildlife, Oregon State University, US, who carried out this study published in Biology Letter in June (see “We are causing magnetic noise”). The study indicates that small differences in the magnetic environment of hatcheries could help explain why some hatchery fish do better than others when they are released into the wild.

Smetacek, the author of the book Butterflies on the Roof of the World, says, “When we get to know the amazing complexities of nature, we learn to appreciate the need to conserve what is left.”