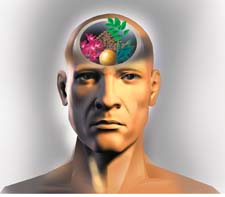 thanks to ayurveda, Subhash Jacob is free from migraine now. The headache was with him for over 30 years. Repeated attempts at seeking cure from different schools of medicines were ineffective and left him with many side effects. "I am 90 per cent cured after I took the ayurvedic treatment," says Jacob, a scientist at the Indian Institute of Science, Bangalore.
The treatment that Jacob took was developed in 2002 by Balendu Prakash, the director of the vcpc Research Foundation in Dehradun, Uttaranchal. A blend of five herbo-mineral drugs mentioned in the ancient ayurvedic texts, the new treatment, according to Prakash, cures the headache in 120 days. He has trained many traditional practitioners around the country in the system. They later applied the treatment on more than 400 migraine patients in Karnataka, Andhra Pradesh and Maharashtra.The findings of their experiments with migraine were presented at the 13th Congress of the International Headache Society (ihs), Stockholm (see figure Better feedback).

The study followed guidelines for traditional medicines set by the World Health Organization, which puts migraine as 19th in the list of causes for 'years lived with disability'--work days lost due to the disease. It is estimated that migraine costs us employers over us $24 billion every year.
Prakash and the traditional practitioners conducted 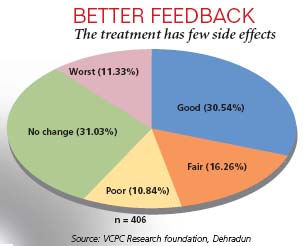 the experiments between May 2005 and March 2007 among patients who were suffering from the most common form of migraine--migraine without an aura. They were advised to rearrange their lifestyle and diet; to give up coffee, chillies, onions and red meat, to name a few. The drugs given included narikel lavana, sootashekhar rasa, sitopaladi, rasonadi vati, godanti mishran--a mix of herbs like ginger, turmeric, charcoaled coconut, dhatura, bamboo, and minerals like silver oxide, copper oxide, sulphur and gypsum.

According to the vaidyas--traditional ayurvedic practitioners--the treatment works on the principle that migraine occurs when the acid-alkaline balance in the stomach is disturbed. This, according to them, leads to increased pitta--a measure used in ayurveda to check a person's health using the pulse--and affects body functions. "The medicine helps maintain the balance," says S Raghvendra Babu of the Padaav Speciality Ayurvedic Treatment Centre, Bangalore, who co-ordinated the study.

The cure is also dependent on the change in lifestyle of the patients, say experts. Though considered genetic in nature, a variety of environmental factors trigger migraine--stress, change in weather and the food consumed. Both ayurveda and allopathy cite irregular eating habits like long intervals between meals as causes for migraine. "Under allopathy, a neurologist treats migraine while in ayurveda it falls under gastroenterology," says Babu.

The practitioners pooled data from different clinics and analysed it. "This multi centric documentation of clinical practice is a novel method of ayurvedic research," says Prakash. But Ish Anand, a neurologist at the Sir Ganga Ram Hospital, Delhi, does not approve of the research method. "Double blind study under which the efficacy of a treatment is tested against a placebo is the only way," says Anand.
What makes the ayurvedic treatment significant and more viable? Studies show that patients following allopathic treatments for migraine for long tend to be dependent on drugs. There have been cases of medicine over-use causing headaches in patients, which demands further medical help. But the ayurveda method has little side effects and the shorter spell of treatment also reduces treatment cost. A full course of the treatment costs between Rs 8,000 to 12,000 while a month's medicines cost about Rs 200 in allopathy, which demands a lifelong treatment.

The global market for allopathic migraine drugs is worth us $3.4 billion; experts, however, say this will go down to us $3.2 billion by 2015 with cheaper drugs reaching the market. In India, the ayurvedic drug industry is ready to tap this market. Ipca Laboratories, Mumbai, is trying to market the ayurvedic treatment for migraine. This could help the about 20 per cent people suffering from migraine in India.