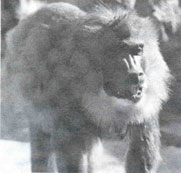 Only a few animals develop symptoms of the acquired immunodeficiency syndrome (AIDS), similar to that seen in human beings. As a result, scientists are unable to test new drugs and vaccines against the AIDS-causing human immunodeficiency virus (HIV) on animal models before trying them on human volunteers.

But now scientists Susan W Barnett and her colleagues at the University of California in San Francisco have successfully infected 6 baboons (Papio cynocephalus) with a strain of the virus, known as HIV-2 (Science, Vol 266, No 5185). This strain infects people largely in West Africa, and has now been reported even in India.

Unlike the endangered chimpanzee and the pig-tailed macaque which are susceptible to HIV-1 infection, but do not develop overt signs of the disease, the baboons have developed several different clinical symptoms characteristic of the disease in humans.